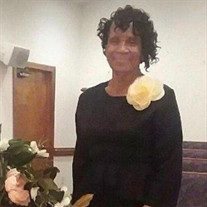 Minister Linda Daniels Carter was born February 6, 1952 in Martin County to late Annie Louise Hudgins and late Henry Daniels. She was the third of five children, one preceding her in death, Donald Daniels. Minister Linda passed away on Wednesday, August 25, 2021 at Vidant Medical Center. Linda was educated in the Martin County School System at East End and would go on to matriculate at St. Augustine's University in Raleigh NC, where she obtained a Bachelors in Business Administration and became a member of Alpha Kappa Alpha Sorority. Linda's career and personal journey would take her to the piedmont area of the state to Winston Salem, NC where she was employed by Piedmont Airlines and met her husband William Carter (deceased). Linda soon returned to her roots of eastern NC and joined her alma mater East End school as a teacher's assistant. Later she would find her true calling as a Vocational Rehabilitation Trainer and Assistant for Martin Enterprise, Inc. where she touched and inspired so many lives. Linda professed her life to Christ at an early age and became an avid soldier for Christ. She loved working in her beloved church, Macedonia MBC and served in many roles within the church. She also served as the assistant secretary for the Middle Ground Association. Given her love for the church and the Lord, Linda made her dream of becoming a licensed minister come true on January 10, 2010. Linda enjoyed couponing, “shop kicking”, working with the Food Pantry of Robersonville and her family, so much so, that the order has been given, “make sure to continue the family reunion”. She also enjoyed giving of her time with the elderly and a number of local organizations. Linda leaves to cherish her sons, Kenya Carter-Durham, NC, Darren Lovingood (Katrina)-Raleigh, NC; a sister, Sharon Hudgins-Waters-Durham, NC; two brothers, Frederick Daniels (Evange)-Baltimore MD and Wyatt Daniel-Williamston NC; three grandchildren, Kevon Carter, Kania Carter and Ka’Zhaun Manning; a host of well-loved and appreciated family and friends.

Minister Linda Daniels Carter was born February 6, 1952 in Martin County to late Annie Louise Hudgins and late Henry Daniels. She was the third of five children, one preceding her in death, Donald Daniels. Minister Linda passed away on Wednesday,... View Obituary & Service Information

The family of Ms. Linda Carter created this Life Tributes page to make it easy to share your memories.

Send flowers to the Carter family.