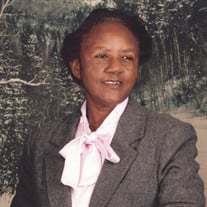 Mother Lillie Mae Mooring Vines, daughter of Chester and Melissa Mooring was born on a farm in Pitt County on May 20, 1922. She transitioned from labor to reward on Thursday, September 10, 2020 at the Red Oak Manor Assisted Living Facility, Greenville, NC. Mother Vines’ unwavering faith in God and strong will to live carried her throughout her 98 years of life. Mother Vines, affectionately called “Lillie Mae” by her many relatives and friends, received her formal education in the Pitt County School System. As an adult, she furthered her education with classes at Pitt Community College. Mother Vines was employed in the farming industry and retired as a housekeeper from East Carolina University. Mother Vines was also a gifted seamstress, quilter and upholsterer. Mother Vines was united in Holy Matrimony to Ulysses Vines for 52 years. This union was blessed with four loving children. Mother Vines joined the St. Mary Missionary Baptist Church at an early age and served faithfully as a member of the Mother’s Board, the Senior Choir, Able Book Club, Home Mission, Senior Fellowship Ministry, Sunday School, Bible Study and Baptist Training Union. She was a quiet, prayerful warrior. When a problem presented itself, she led by Christian example and would say “Let’s pray about it!” She was a woman of faith, and a true matriarch of the Vines family. Although known for her quiet disposition, some of her greatest joy came from cooking for and graciously hosting relatives and friends who stopped by for a visit. She was a remarkable cook and enjoyed preparing meals for those she loved, especially during the holidays. Each visitor held a special place in her heart. A farm girl at heart, Mother Vines was an early riser and accomplished many activities before daybreak. Walking and gardening were just a few of her passions. It was early mornings when she rose to walk for miles as exercise. She would then turn her attention to her beautiful flower garden where her green thumb held the secrets to make a garden flourish. Mother Vines continued her early morning routine well into her nineties when her failing health required her to stop, but she remained enthusiastic about walking. One could even say walking was one of her secrets to a long life. To Mother Vines, walking was her opportunity to reflect and spend time with her Lord and Saviour before the hustle and bustle of each day. Her independent spirit and clockwork routine led her to wake in the early hours of September 10, 2020, and dress herself to take her walk through the Gates of Heaven. Mother Vines faithfully cared for family and friends over many decades. Her signature gift of spreading love and joy through her constant smiles, her laughter and quick wit, and her Christian fellowship will never be forgotten. Mother Vines was preceded in death by her parents, Chester and Melissa Mooring; her husband, Ulysses Vines; her eldest daughter, Josephine Mays; her sisters, Bruce Mooring and Mable Moore; her brothers, Chester Mooring, Leonard Mooring, Bonnie Mooring, S.T. Mooring. Mother Vines leaves to cherish her legacy, one daughter, Vivian Vines of Greenville, NC; two sons, Freddie Vines of Greenville, NC and William David Vines of Raleigh, NC; six grandchildren, Tamila Lee (Larry) of Charlotte, NC, Kenasha Laws (Kenneth) of Winterville, NC, Lyric Cunningham of Burlington, NC, James Jones of Killeen, TX, Reginald Mays (LaVonda) of Richmond, VA, and Houston Vines (Kara) of Morrisville, NC; six nieces, Margaret Hagood of Philadelphia, PA, Betty Lee (Lawrence) of District Heights, MD, Sylvia Bowen of Washington, DC, Jennifer Barnes (Michael) of Clayton, NC, Hilda Mooring of New Haven, CT, and Jean Mooring of Birmingham, AL; four nephews, Earl Mooring (Grace) of Kansas City, MO, Garland Morning (Betty) of Greenville, NC, Clayton Mooring (Chana) of Baltimore, MD and Kevin Mooring (Loray) of Baltimore, MD; nine great grandchildren; and host of other relatives and friends.

Mother Lillie Mae Mooring Vines, daughter of Chester and Melissa Mooring was born on a farm in Pitt County on May 20, 1922. She transitioned from labor to reward on Thursday, September 10, 2020 at the Red Oak Manor Assisted Living Facility,... View Obituary & Service Information

The family of Mrs. Lillie Mae Vines created this Life Tributes page to make it easy to share your memories.

Send flowers to the Vines family.