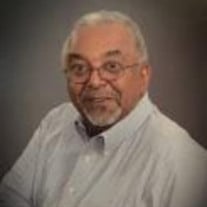 Lesley McDaniel “Mac” Spaulding was born on June 14, 1947 in Clarkton, North Carolina, Columbus County. He was the oldest of three children born to the late Daniel Lesley and Alice Shaw Spaulding. He departed this earthly life Thursday, January 28, 2021 at his home residence among loved ones. Lesley was a graduate of Artesia High School in Hallsboro, North Carolina, Class of 1965. He received a Bachelor of Science Degree in Public Education in 1973 from Elizabeth City State University, in Elizabeth City, North Carolina. In 1968 during the pursuit of his bachelor’s degree, he was drafted into the United States Air Force. Lesley served his country with pride and later in the reserves with the local National Guard Unit 514th MP. He served in the military for more than twenty-five years. After active duty service in Air Force, he worked in the Edgecombe County school system as an educator for nearly thirty years. He was united in holy matrimony in December 1967 to Gloria Bowman in Elizabeth City, North Carolina. This union was blessed for 53 years of devotion, support, love and produced three children, Sharnelle, Monica and Darryl. Lesley was a member of Rehobeth A.M.E. Zion Church in Clarkton North Carolina as a youth. Later as an adult, he became an active member at Sycamore Hill Missionary Baptist Church of Greenville, North Carolina, where he served faithfully on the Men’s Usher Board and Trustee Board. He was a member of the North Carolina Association of Educators, Kappa Alpha Psi Fraternity Inc., and National Association of American Veterans. He was a businessman and owner of Spaulding Cleaning Service for nearly forty years. “Mac” was always willing to help others in need and provide advice whenever solicited. He was devoted to his wife and children. He loved participating in family and church activities. He was a kind and gentle person who always put his family first. He loved spent time fishing, grilling outdoors and travelling places with family. He was a dedicated gardener who often tended to his vegetable garden in the backyard. He was preceded in death by his parents and a brother, Malcolm Ray Spaulding of Clarkton, North Carolina. Lesley leaves to cherish his precious memories, a loving and supportive wife, Gloria Spaulding of Greenville, North Carolina; two daughters, Sharnelle Phifer (Julian) of Durham, North Carolina, Monica Topping (James) of Durham, North Carolina; one son, Darryl Spaulding (Tasha) of Virginia Beach, Virginia; one sister, Marion Spaulding-Webb of Charlotte, North Carolina; six grandchildren, Zyonna Spaulding, Gabrielle Phifer, Jazzmin Spaulding, Jaylah Spaulding, Aaron Phifer and Quinn Topping; two brothers-in law; four sisters-in-law; one aunt, one uncle, a host of nephews, nieces, cousins and friends.

The family of Mr. Lesley McDaniel Spaulding created this Life Tributes page to make it easy to share your memories.

Send flowers to the Spaulding family.