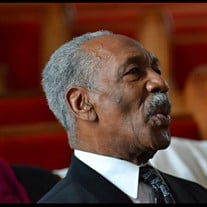 Leon Paul Marshall, son of the late Robert E Marshall and Katherine Lee Marshall was born on August 30, 1933. Leon was the youngest of six children and is survived by his only sister, Inez Stokes. He was 86 years of age when he departed this life on June 25, 2020. Leon was a veteran of the Army and served in the Korean War. He worked for Baltimore Gas and Electric and retired after 35 years of service. On June 16, 1957 he married his wife of 63 years, Evelyn Jean Marshall. During their union they were blessed to raise 9 children: Dwight Marshall, Linwood Marshall, Angela Marshall, Larry Marshall, Dennis Marshall, Ronald Marshall, Tyronda Marshall, Tanika Marshall and Shanika Marshall. Leon loved his wife and children unconditionally. He was a man of integrity; a hard worker with impeccable work ethic; honest; and a great listener. When you ask his children to describe him, they would often say he was hard but fair; dedicated to duty; loving; funny and full of personality; a strong quiet presence; and a man of few words but every word spoken was rich with wisdom. Whenever his wife spoke of her husband, who she affectionately referred to as Bae, she would first share a warmhearted smile and say he is her love; he is a good husband; he is a good provider for the family, and we move as one. They walked hand-in-hand through their life together. Most importantly, Leon was a man of resilient faith. He loved God more than life itself and had been a faithful servant for the past 52 years. The love he had for God was not just in words, it came from the depth of his soul, it fueled his very existence, and gave him real joy and peace during troubled times. Whenever he gave a resounding HALLELUJAH the sincerity of his praise was felt by all. Leon leaves to cherish his memory 1 sister, 9 children, 23 grandchildren, 89 great-grandchildren, and 13 great-great-grandchildren and a host of family and friends. His favorite Scripture was Psalms 1:1-6. When asked how you are doing today daddy he would always reply “Pretty and Good”.

Leon Paul Marshall, son of the late Robert E Marshall and Katherine Lee Marshall was born on August 30, 1933. Leon was the youngest of six children and is survived by his only sister, Inez Stokes. He was 86 years of age when he departed this... View Obituary & Service Information

The family of Mr. Leon Marshall created this Life Tributes page to make it easy to share your memories.

Send flowers to the Marshall family.