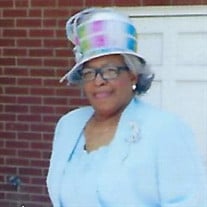 Lenoral Razor Taylor, daughter of the late Richard Sr. and Catherine Williams Razor was born on August 5, 1944 in Martin County, North Carolina. She departed this life to be with the Lord in the early morning hours of August 5, 2020. Lenoral received her education from Martin County Public Schools. Mrs. Taylor was a member of The Friendly Church Of The Apostolic Faith in Jamaica Queens, New York where the pastor at that time was Elder Leroy Newman and First Lady Mattie Newman. This is where she reared her family for many years until deciding to move back to North Carolina. Mrs. Taylor was also a member of Holy Trinity UHC where the pastor is Bishop Ralph E. Love, Sr. and Lady Frieda Love, where she remained a member until her health started to fail her. Mrs. Taylor was a devoted mother, sister, aunt, grandmother, great grandmother, great-great grandmother and to all of them that came in contact with her. She was a no-nonsense woman who did not take any mess off anyone and would get you together real quick. Mrs. Taylor was preceded in death by her parents, Richard and Catherine Razor; sisters, Ethel Razor Keel, Annie Ruth Dawson Kates; brothers, Richard Razor, Jr. and William Lawerence Razor. Mrs. Taylor leaves to cherish her memory her children, Vanessa Razor Smith (Wardell) of Winterville, NC, Maurice Razor of Winterville, NC, Randy Razor (Patrice) of Byron, MS, Cookie OkeOke (Ike) of Raleigh, NC; seven grandchildren; three great-grandchildren; one great-great grandchildren; her siblings, Emma Jean Congleton (Willie) of Robersonville, NC, Mamie Freeman (Hurron) of Robersonville, NC, Josie Goddard of Baltimore, MD, Donnie Razor of Atlanta, GA, Jimmy Razor (Freda) of Williamston, NC; she had two special men in her life who she loved and treated them like her own, Donnie Junior Razor, Vance T. Clark; her best friend for life, Lucinda“Cindy” Pitts; a host of nieces, nephews, cousins, other relatives and friends.

Lenoral Razor Taylor, daughter of the late Richard Sr. and Catherine Williams Razor was born on August 5, 1944 in Martin County, North Carolina. She departed this life to be with the Lord in the early morning hours of August 5, 2020. Lenoral... View Obituary & Service Information

The family of Ms. Lenoral Taylor created this Life Tributes page to make it easy to share your memories.

Send flowers to the Taylor family.