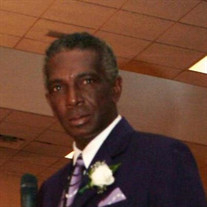 The Elder Lee Andrus Brimage departed this earthly life and transitioned to be with his heavenly father on December 2, 2019 with his family by his side. He was born on October 22, 1950 in Scranton, NC to the late Lee Barber and Vernice Mae Brimage-Payton.... View Obituary & Service Information

The family of Elder LeeAndrus Brimage created this Life Tributes page to make it easy to share your memories.

Send flowers to the Brimage family.