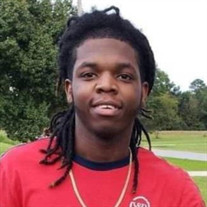 To view the service please go to Congleton Funeral Home and Cremations Facebook Page at the time of service. Latrell Raquwan Heath, &#8220;Trell&#8221;, was born on June 28, 1999 in Greenville, NC to Liquata Heath and Tyrell Griggs. He was... View Obituary & Service Information

The family of Mr. Latrell Raquwan Heath created this Life Tributes page to make it easy to share your memories.

To view the service please go to Congleton Funeral Home and Cremations...

Send flowers to the Heath family.