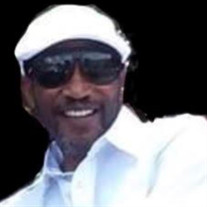 Death is the golden key to eternity. On Friday, August 6, 2021, Larry Earl “JoJo” Dixon, transitioned from this earthly home to a home on the other side. A loving son, brother, father, grandfather, uncle, and friend to many. Larry was born June 9, 1954, in Greenville, NC to Doris Dixon and the late Larry Dixon, Jr. He was married to the late Lottie Dixon. Larry was baptized and accepted the Lord Jesus Christ and was a member of Philippi Church of Christ Disciples of Christ. As a member of Philippi, he joined and played with the Philippi Eagles Baseball Team. Prior to COVID-19 Larry was seen every Sunday riding his scooter to church. In September 1968, Larry was one of the blacks to attend the predominately white JH Rose High School where he also played baseball. Larry graduated from J.H. Rose High School in 1972. Larry was very active in sports which included baseball, softball, and boxing. In April of 1968, Larry was one of the first African American to integrate the all-white Babe Ruth League at Guy Smith Baseball Stadium in Greenville, North Carolina. He joined the Jesse Daniels Boxing Club on Albemarle Ave in 1971. As he got older, Larry continued playing softball with the following teams: Greenville Public Works, Universal Seafood, Cheetahs and Papa Slack's All Stars. Larry was employed at the City of Greenville Public Works Department as a Truck Driver and East Carolina University Grounds Maintenance as a Landscaper. Larry was affectionately known by his children as “Da” and he lovingly called his grandchildren “little rats” because he was the “Big Cheese.” He was a devoted son to his mother whom he cherished and loved dearly. He was a big brother to his sister, and he was extremely fond of his children and precious grandchildren. Larry spent his free time attending his grandchildren baseball games and practices. He will truly be missed by all who knew him. Larry was crazy about his dogs. Larry was preceded in death by his son, Malcolm Barnhill; his daughter, Arvella “Kita” Barnhill and a special friend, Charlotte Barnhill. Larry leaves a legacy of love, his children, Tonya Dixon of Raleigh, NC, Terrell Langley of Albany, Oregon, Jacquetta Jackson of Greenville, NC, Larry “JoJo” Barnhill (Cristal) of Greenville, NC and Frena Hymn of Greenville, NC; his mother, Doris Dixon of the home; his sister, Angela Dixon of Newport News, VA.; seventeen grandchildren; seven great grandchildren; two aunts, Emma Spruiel of Newport News, VA, Margaret Lloyd of Farmville, NC; one uncle, Louis Griffin of Greenville, NC ; two godchildren, Leonard Williams, Jr and Nikeda Nobles; special friends, Terry Freeman, Denise Langley, JC Daniels, David Williams, Michael Ward, Harold Stevenson, William “Fuzz” Matthews , Ronald (Fox) Coggins, reece Woolard, and Fago Mayo, two devoted cousins, Lindsey Roundtree and Johnnie C. Dixon; host of nieces, nephews, cousins and other relatives and friends. Sleep on Larry and take your rest we love you, But God love you Best. We tried so hard for you to stay but God was in control and took you Safely Home. ~ ~ ~ Affectionately Ma ~ ~ ~

Death is the golden key to eternity. On Friday, August 6, 2021, Larry Earl &#8220;JoJo&#8221; Dixon, transitioned from this earthly home to a home on the other side. A loving son, brother, father, grandfather, uncle, and friend to many. Larry... View Obituary & Service Information

The family of Mr. Larry Earl Dixon created this Life Tributes page to make it easy to share your memories.

Send flowers to the Dixon family.