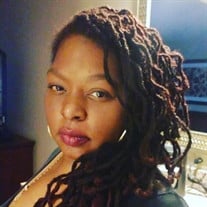 Lakeisha Lee Tomaseina Hazelton, 46, passed away on December 23, 2021. Lakeisha was born in Greenville on January 16, 1975, to the late Debra Ann Hazelton and Linwood Smith. Lakeisha was the first and only granddaughter of Bessie King Best. She graduated from D.H. Conley High School. LaKeisha lived in Greenville until she moved to Ashburn, Virginia and later Herndon, Virginia, where she lived until her death. Lakeisha was an employee of VIP Communications and later an Analyst at K-12 Stride. She was a member of Rehoboth United Christian Church in Fredericksburg, Virginia and served on the treasury committee. Lakeisha loved to sing and renewed her faith at Rehoboth where she built a stronger relationship with the Lord. Lakeisha is survived by her loving brother, Eric T. Hazelton (Wendy S. Hazelton) of Ayden; three aunts: Pearl Best Wilkins of Raleigh, who was a second mother to her; Bonitta Best of Raleigh; and Marion Hazelton Minor of Winterville; one nephew: Jacob Jefferson; two nieces: Neveah Hazelton of Ayden and Ariana Holmes of Florida; first cousin Reginald Wilkins of Raleigh; two uncles: Michael Williams and Henry McClaud, both of Greenville and a host of other relatives and friends. On Wednesday, December 22, 2021, Lakeisha was happy, packed and ready to come home to stay with her brother and family the following day. Lakeisha's Christmas presents were under the tree and food was being prepared for her arrival. Lakeisha's aunts were preparing to come home and the family was looking forward to having a joyous time. Although Lakeisha had planned to leave at 7:00 am the following morning, God had already changed her plans and decided on a better home where her mother Debra, grandmother Bessie and Uncle Thomas were waiting for her. The family is devastated and we love her so much but with God's grace, time and prayers, Lakeisha's family will be fine. The family would like to thank everyone for their prayers, phone calls and text messages. “Jesus said to her, ‘I am the resurrection and the life. He who believes in me will live, even though he dies; and whoever lives and believes in me will never die." John 11:25-26.

Lakeisha Lee Tomaseina Hazelton, 46, passed away on December 23, 2021. Lakeisha was born in Greenville on January 16, 1975, to the late Debra Ann Hazelton and Linwood Smith. Lakeisha was the first and only granddaughter of Bessie King Best.... View Obituary & Service Information

The family of Ms. Lakeisha Hazelton created this Life Tributes page to make it easy to share your memories.

Send flowers to the Hazelton family.