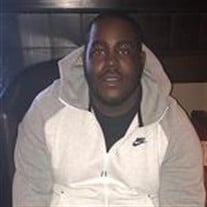 Kenneth Anthony Styles was born on March 27, 2000 in Washington, D.C. to Tekelia and William Styles IV. He departed this life on May 15, 2020. Kenneth took his Shahadah in 2010 at the age of ten years old and lead prayer at the age of eleven in Arabic. His muslin name was “Latif” which mean strong and kind. Kenneth graduated from Rocky Mount High School in 2018. He was the last of the three in household to accomplish that and he was proud. Kenneth loved to learn and was proud to be a student, he truly enjoyed the concept. He became focused and empowered to support his family in major ways. Family was always what he cared about more than anything and he loved like no other. Kenneth quickly became active in his community and developed a love for sports and charitable events with Boys and Girls Club. At the club and in his community, he built bonds with everyone everywhere he went. He was so full of jokes, good laughs, support, and courage. He loved being around his family, friends, and was always on the new chiraq music. He built the strongest bonds with his teachers and classmates, always being the light in the room. Kenneth was Co-Partner with his father of RESPECTED clothing. Kenneth is no longer here on Earth with us, but he will always be here in our hearts and in spirit. He will never be forgotten, not his smile, not his laugh, not his persona, and his love is what we all that really knew him knows we will remember the most. Kenneth was preceded in death by his brother, William Roland. Kenneth leaves to cherish his memories, parents, Tekelia and William Styles IV; grandson of Ricky Parker and the baby boy of the household; four sisters, Destiny, Dajah, Zoya and Fatimah Styles; two nephews, Legend Burney, Sincere Cheatham; three nieces, Angel Foster, Khloe Pitts, and Aaliyah Hines whom he loved dearly. He was extremely devoted to his family and friends.

Kenneth Anthony Styles was born on March 27, 2000 in Washington, D.C. to Tekelia and William Styles IV. He departed this life on May 15, 2020. Kenneth took his Shahadah in 2010 at the age of ten years old and lead prayer at the age of eleven... View Obituary & Service Information

The family of Mr. Kenneth Anthony Styles created this Life Tributes page to make it easy to share your memories.

Send flowers to the Styles family.