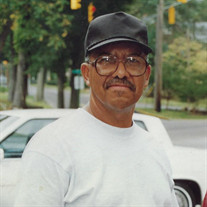 Julius Edward Streeter, affectionately known as “Buddy,” was born to the late Lacy Streeter II and Alice Daniels Streeter on Tuesday, August 25, 1942 in Pitt County, N.C. He died on February 2, 2020 in Greenville, N.C. Born the 5th of 7 children, Julius grew to be an intelligent, funny and thoughtful man. He was hardworking and even as a child always worked with his father and brothers in some capacity; be it the family grocery store, construction company, cleaners and later a laundry mat on 5th Street. He received his primary and secondary education in Pitt County, graduating from C.M. Eppes High School in 1961. In High School, he had the nickname of “Jive.” He was involved in several activist organizations including the SCLC and SNCC. Julius served in the United State Army from 1963-1965 as a Medic. In 1968 he began a career with the United States Postal Service He worked as a Clerk. He was the second African American hired in Greenville. He worked there until his Retirement in 1993. After retiring, he never stopped working. He then took his part-time hobby as a retailer in local and regional outdoor markets and turned it into his full-time job. He traveled extensively throughout North Carolina to various markets and festivals. He was affectionately known as, “The Cap Man.” Julius had interests in reading, always keeping a newspaper nearby and his home hosted encyclopedias, historical and economical texts, along with a menagerie of other genres and media types. He was an avid Lot-to and Card Player. He loved working for himself, the hours, and the people he met, from every walk of life. There was always a good word to be said for Buddy. He was built for retail, with the personality, intelligence and tenacity to balance it well. His work and travel allowed him to stay active all his life. Julius was adamant about being healthy and would walk extensively, in and out of town, to stay in shape. Julius was a man who worked hard, as well as a man who played hard. He spent his later years on his own terms and enjoyed time most every day with family and friends, “On the block.” Above all, he loved his family, friends and neighborhood. He was a deeply beloved Father, Grandfather, Great-grandfather, Brother and Uncle. Born and raised Greenville, he never forgot his roots and he remained close to his community throughout his lifetime. No matter how far he would travel, be it for work, family, leisure or all three, he always returned home. Learning was one of the great loves of his life. Because of it, he always encouraged not only them but his grandchildren, nieces and nephews to seek knowledge and think for themselves. No matter his age, he never lost the desire to gain new understanding of life, be it politics, world events, history, general trivia and black culture. He possessed an amazing memory and was a wealth of information in family history. Often, he’d talk about the history of Greenville and the advancements he saw in his lifetime. His other loves were his grandsons, Joshua and Bryan “Jordon”. He leaves a legacy of Knowledge, Kindness and Kinship. Julius was proceeded in death by his mother and father, along with his brothers, Lacy III, Robert S., James R. and George A., along with one sister, Myrtle. Julius is survived by his four daughters, Beverly Wagner (Dee) of Winston-Salem and Danica Streeter of Greenville, N.C., Sonya Williams of Clinton, MD, Nikki Gross (Tony) of Waldorf, MD; one sister, Alice “Dot” Bullie of Rockville, M.D.; two brothers, William Dudley (Annie Pearl) of Greenville, N.C. and Douglas Lanier (Lucretia) of Trinidad and Tobago; two grandsons, Joshua Wagner of Durham, Bryan Best of Raleigh; six great granddaughters; two sisters-in-law, Carol Pridgen (Willie) of Greenville, N.C. and Rev. Dr. Barbara Akins-Streeter of Raleigh, N.C; a host of nieces, nephews, extended family and beloved friends.

The family of Mr. Julius Edward Streeter created this Life Tributes page to make it easy to share your memories.

Send flowers to the Streeter family.