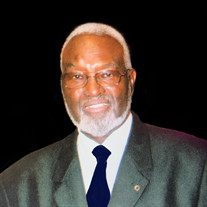 In Lieu of flowers please make a donation to The Now I Am Nia Foundation. Joseph Roberson born on November 25, 1929, and he was called to be with the Lord on Thursday, March 25, 2021 at his home full with the love of his family. Joseph was born in Williamston, North Carolina, the eldest child of the late Mary Gladys Williams Roberson and James Roberson, Sr. On January 11, 1954 he married Alma Marie Bennett and their union produced 4 children. Joseph Roberson, Jr., Alice Roberson, Terrence Roberson, and Valerie Roberson-Edwards. Joseph loved his home, Williamston. He was always proud to bring his children and grandchildren on tours about the old days in town and out in the “country.” In 1960 he relocated his family to Connecticut, and spent some years living in Massachusetts. He spent most of his career as a machine operator for Colored Films and retired in 1994 from Arnold’s Bakery in Greenwich, Connecticut. Joseph LOVED his family! He loved fellowshipping as a family by eating dinner together, singing songs, and watching the news. He was unable to be formally educated so he was a huge advocate for education. He attended all of his family’s academic and social events; he went out of his way to celebrate and bond with everyone. He was adored and he knew it! He enjoyed being spoiled by his family and appreciated when they would bring him French Vanilla Coffee with a coffee roll. Joseph loved God and thought it was important to serve God through helping others and the church. He was a devoted member of Union Baptist Church in Stamford, Connecticut where he served as an usher, singer in the men’s choir, and as a Deacon. He was a member of Chapel Hill Church until his passing. He is predeceased by: His beloved grandparents, Cain and Aurelia Williams; His parents: Mary Gladys Williams-Roberson, James Roberson, Sr.; Brothers MacArthur, Earnest, James Jr., Aulander, John Lester, and Thomas; Sisters, Pauline Brodie, and Gladys Hudson. Adopted son, Richard Knight. Joseph leaves to cherish his memories: His beloved Siblings: Shirley Howard, Betty Spruill, Benjamin Roberson (Gloria), Joyce Roberson, Rev. Janice Brodie, and Rev. Dr. Russell Roberson (Shirley). His wife of 67 years, Alma Marie Bennett-Roberson. His 4 children: Joseph "Ray" Roberson, Jr., Alice Roberson, Terrence Roberson, and Valerie Roberson-Edwards (Stefan). 8 Grandchildren: Gerald Roberson (Lashanda), Joseph “Jupiter” Roberson III, Jacquelyn “Lavone” Roberson, Jasmin Roberson, Ivory Roberson (Trei), Jayme Roberson-Mackey, Brittney Cobb, Paxton “PJ” Cobb, Jr.; 7 Great Grandchildren, and 3 Great-Great Grandchildren. Special Family and Friends: Jackie Roberson, Eurine and Aurine Pervis, Aunts, Uncles, Nieces, Nephews, Cousins, In-Laws, and Friends.

In Lieu of flowers please make a donation to The Now I Am Nia Foundation. Joseph Roberson born on November 25, 1929, and he was called to be with the Lord on Thursday, March 25, 2021 at his home full with the love of his family. Joseph was... View Obituary & Service Information

The family of Mr. Joseph Roberson created this Life Tributes page to make it easy to share your memories.

In Lieu of flowers please make a donation to The Now I Am Nia...

Send flowers to the Roberson family.