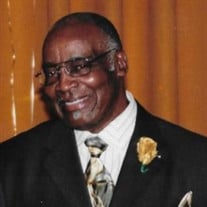 Joseph Moore Modica, son of the late Essie Mae Modica and Joseph Moore, was born August 4, 1935 and called to his heavenly home on April 23, 2021. Joseph attended the Martin County Public Schools in Robersonville, NC. He married the love of his life, Jannie Ampley. They were married for over 65 years and from this union seven children were born. He joined Roberson Baptist Church at an early age and was faithful, committed and consistent in his service. Joseph served as a Deacon, Trustee, Member of each choir in the church. He was an honorary member of the youth choir. Joseph truly enjoyed singing with them. He was inspired by them just as much as they were inspired by them just as much as they were inspired by him. Joseph was a truck driver for most of his life. He drove for Grimes Trucking, Central Soya, Johnson Merchantile and Coastal Chemical. He was known as BJ “Broadway Joe”, Hose’ and Joe Mo by his trucking family. Joseph in his early years enjoyed playing baseball and horseshoes. He was known as the only man to hit a homerun across the Central Soya plant. He loved spending quality time with his family. Joseph was affectionally known as “DiDi” by his grands and adopted family, young and old. Joseph was a man who had love for everyone he met. His life was a reflection of his faith. Joseph was known for his singing ability. Some of his favorite songs were “Sending Up My Timber, Last Mile of the Way, I Am Redeemed, The Lighthouse” just to name a few. He especially enjoyed singing with his family at home. Joe even had his own singing group, “The Joe Modica Singers” which consist of his children and grandchildren. They performed on several programs. He was very proud to know they were following in his footsteps. Joseph will be greatly missed, and hearts will forever be saddened, but God have a better plan for him. We believe he is resting peacefully with the Lord. Joseph was preceded in death by his parents, Essie Mae Modica, Joseph Moore; one daughter, Lynda J. Ampley; one son, Troy Keith Modica; one granddaughter, Lakeisha R. Wilson. Joseph is survived by his wife, Jannie; four daughters, Cathy Wallace (Kenneth), Gail Wilson (Rondy), Debra Andrews, Becky Strange (Bryan) and Lisa Modica; six grandchildren, Kenya Wallace, Tanisa Whitehurst, Jarrett Modica, Erica Thomas, Lyntoya Ampley, Tamica Everett, and Marque Modica; twenty-one great-grands; five great-great grands; two brothers, Theodore Modica (Jeanette), James “Dick” Teel; one cousin/sister, Suzette Modica; two dedicated adopted sons, Donnell Williams, Michael Moore; a host of nieces, nephews, adopted family and friends; two special and dedicated friends, Deacon Leon Hines and Lash Razor.

The family of Mr. Joseph Modica created this Life Tributes page to make it easy to share your memories.

Send flowers to the Modica family.