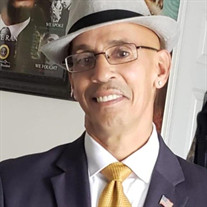 Jose “Raymond” Reyes was born on August 14, 1957 in Brooklyn, NY to the late Rosa Roman. He departed this life on March 17, 2020 at Vidant Hospice Inpatient, Greenville, NC. Jose graduated high school in Brooklyn, NY in 1976 and went on to join the United States Army where he served for four years. After making the decision to leave the Army he worked several other jobs and earned the title of “jack of all trades”. Jose begin to work with New York Public Housing Authority where he worked his way up to a supervisor over ground keeping and retired at the age of 57 from New York Housing Authority. Jose moved to Greenville, NC after his retirement and met Veronica. After dating for a year, they were united in marriage. Jose joined Whosoever Will Let Them Come Ministries, where he served as a Trustee and Usher. He took his position in church very seriously. Jose was in the Mason for many years. Jose was preceded in death by his mother, Rosa Roman; brothers, Dominic Reyes and Roel Rico Reyes; uncle, William Roman. Jose leaves to cherish his memories, the love of his life and best friend, Veronica Reyes of the home; children, Jose Reyes, Jr. of New York, Cynthia Cox (Mario) of New Jersey, Jermey Reyes (Nancy) of New York and Amanda Reyes of Pennsylvania; seven step-children; a brother from another mother, Albert Copeland; special cousin, Tito; special niece, Vakisha Freeman; a host of grandchildren, nieces, nephews, other relatives and special friends.

The family of Mr. Jose Reyes created this Life Tributes page to make it easy to share your memories.

Send flowers to the Reyes family.