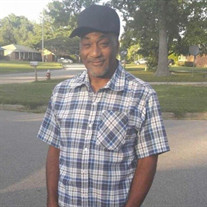 Johnny “John Earl” Council was born on October 21, 1960 to the late Johnny Ray Thigpen and the late Margaret Walker in Martin County. He departed this life on March 1, 2019 at Vidant Medical Center in Greenville, NC. John Earl spent most of his life in Martin County, where he graduated from Roanoke High School. John Earl was a hard worker and has worked various jobs throughout his life. His most recent job was at the Cotton Gin in Bethel, NC. John Earl would work six and sometimes seven days a week. Talking with him, he would say, “I’m tired, but I’m going to make this money”. John Earl was a meek and humble man, who loved his family and friends, and spending time with them was one of the many joys of his life. He had a big heart, loved to laugh and have fun. John Earl went from being a Roanoke Redskin to a Washington Redskins fan and made sure everyone knew it. Because of his joyful and happy spirit, to know John Earl was to love him. John Earl was preceded in death by, his parents; his sister, Barbara Walker. John Earl leaves to cherish his memory, one sister, Antoinette Clemons (William) of Augusta, GA; three brothers, Clint Walker (Jennifer) of Shelton, CT, Alex Brown (Gloria) of Kinston, NC, Rodney Thigpen (Joel) of Richmond, VA; four aunts, Gracie Mourning of Long Island, NY, Janie Council, Betty Council, Emma Council all of Bethel, NC; two uncles, Aaron Council (Mary) of Bethel, NC, William Council (Shaprio) of Greenville, NC; three cousins that were reared in the house, Paulette Council, Shelby Morrison, Michael Council; god parents, Maddie and Jesse Dickens; a special companion, Carolyn Davis; a host of nieces, nephews, cousins, other relatives and friends.

The family of Mr. Johnny Earl Council created this Life Tributes page to make it easy to share your memories.

Send flowers to the Council family.