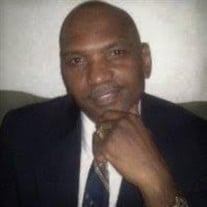 “The Lord is my shepherd: I shall not want.” Psalm 23:1 Johnnie Ivey Johnson, better known as “Dillar” was born on April 5, 1960 to the late Mary Louise Perkins Barfield (George) and Mr. James Willard Johnson. He departed this life on Sunday, December 13, 2020 at Vidant Medical Center. Johnnie was raised in the Belvoir community. He attended and graduated from North Pitt High School the class of 1978. Johnnie furthered his education at North Carolina Central where he studied Psychology. He also studied English Liberal Arts/Secondary Education at Norfolk State University. Johnnie spent most of his career in the field as a Middle School English Teacher at Norfolk Public School. He was a long-term substitute teacher in the Pitt County School System. He really loved teaching the students which was a great passion and the students loved him too. Johnnie was an author of two books one was Poetic Truths. He loved to write poems and had some of his work published on greeting cards. Johnnie was raised in the church and knew the word of God. Sometimes he would like to quote and talk about the scriptures. He was outgoing and he loved life and he loved his family. He was preceded in death by his parents, Mary and George Barfield; his grandmother, Louise Perkins; his aunts, Carolyn Brown, Cora Jennings; his uncles, Johnny Ray, Donnie Perkins, and other uncles and aunts. Johnnie leaves to cherish his memories, his siblings, James Johnson “Bozo” of the home, S.T. Vines of Greenville, NC, Bernetta Patterson, Mary Sheppard, and Louise Teel of Greenville, NC, April Murray (Jerome) of Kinston, NC, Grace Sharpe of Baltimore, MD; aunts, Ernestine Crutcher, Nestilene Chance (Linwood), Josephine Baul-Harris (Barry) of Greenville, NC, Annie Jean West of Danbury, Connecticut, Margaret Perkins of Hampton, Virginia; uncles, Billy Wayne Perkins, Bobby Earl Perkins both of Hampton, VA, William Earl Barfield of Ayden, NC; two sisters-in-law, Alice Johnson of Kansas City, Missouri, Patricia Wooden of Greenville, NC; special friends, Barbara Ann Person, Terrall Smith of Greenville, NC; thirty-six nieces/nephews; five great-nephews; four great-nieces; and a host of cousins, other relatives and friends.

The family of Mr. Johnnie Ivey Johnson created this Life Tributes page to make it easy to share your memories.