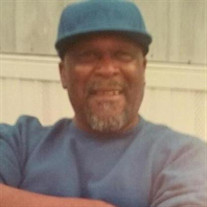 John Horne was born on September 9, 1948 in Martin County to the late David Lee and the late Catherine Taylor Horne. He departed this life on Friday, December 6, 2019. John aka “Chicken Man” attended the Edgecombe County Schools, Battleboro, NC in his younger years. He worked on the farm prior to moving to Bethel, NC where he found his passion for driving trucks. John was employed with Price Logging for about thirty years, which he thoroughly enjoyed working and was still working until his passing. John loved to work on cars. John’s personality and contagious laugh kept his family laughing. He would get on the floor and clown around just to make you laugh. John enjoyed helping people. When it would snow or ice on the road, he would always advise his sisters-in-law to wait until he checked the road before they go out or he would take them. John really enjoyed his family and had much love for his children and grandchildren. John will be greatly missed by his family and friends, although we have saddened hearts, but God was waiting for him to accept him in His loving arms and when he did, he called him home. He had better plans for him. John was preceded in death by his brother, David Lee Horne. John is survived by his wife, Patricia Wiggins Horne of the home; children, Nina Richardson (Owen) of Battleboro, NC; Johnathan Patrick Horne, Ciara Patricia Horne of the home; two grandchildren, Jeremy and Keltcey Richardson; three great-grandchildren, Quentin and Caleb Richardson, Jayce Paige; one sister, Mary H. Hines (Roosevelt); two brothers, Harvey Horne (Cynthia), Tommy Everette; four sisters-in-law that felt more like sisters, Mary Little, Gloria Wiggins, Denise Wiggins, Christine Brown; three cousins that felt like sisters, Noot, Louise, Suemae; four nephews, Frank Horne (Debra), Roosevelt Hines (Selena), Larry Hines (Trina), Earl Hines; two brothers-in-law, Clayton Wiggins, Jesse Ray Little; mother-in-law whom he loved dearly, Emily Wiggins; special friend he worked with, David; a host of nieces, nephews, other relatives and friends.

John Horne was born on September 9, 1948 in Martin County to the late David Lee and the late Catherine Taylor Horne. He departed this life on Friday, December 6, 2019. John aka &#8220;Chicken Man&#8221; attended the Edgecombe County Schools,... View Obituary & Service Information

The family of Mr. John N. Horne created this Life Tributes page to make it easy to share your memories.

Send flowers to the Horne family.