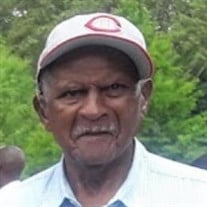 Deacon John Lee Dugger was born June 1, 1935 to the late Charlie and Mamie Roberson Dugger. He departed this life on Thursday, October 28, 2021 at Vidant Roanoke-Chowan Medical Center, Ahoskie North Carolina, after a brief period of failing health. John accepted Christ as his Savior at an early age and served faithfully until the end of his life. He was Chairman Deacon of Providence Missionary Baptist Church where he served until his health declined, where he was a loyal and dedicated member. John was educated in the Martin County and New York. It was in New York that he attended business school and went on to start a business as a service station owner along with his brother, William. John would later leave New York to come home and take over the family farm when his father health declined. Being an entrepreneur, he later gave up farming and became a logger. He retired from logging in 2010. John was united in Holy Matrimony on February 8, 1961 to Julia Lawrence and to this union was born three daughters and later they would come to raise the baby boy that they always wanted. John was a family man. He loved his family especially his grandchildren. He always had an encouraging word and taught his children to be independent and productive people. He was fond of saying “if there is anything, I can help you with, just let me know”, he lived by this saying, by helping many people with whatever the need happened to be. John was preceded in death by four brothers, Leo Townes, Timothy Townes, William Dugger, Willie Dugger; three sisters, Annie Mae Credle, Charlie Virginia McIntoush and Esther Harvey. John leaves to cherish his memory his wife, Julia Dugger; three daughters; Teresa Little of Robersonville, NC (Michael), Veronica Dugger of Jonesboro, GA and Latonia Dugger of Riverdale GA; one son; Gerald Taylor (Camille) of Raleigh, NC, one grandson; 2nd LT Adrian M. Little (Deidra); three granddaughters, Jonecia Trice, Riverdale, GA, Avery Olivia and Amelia June Taylor, Raleigh, NC; two sisters, Ruth Peterson of Waldorf, Maryland, Judy Rhodes (Larry) of Greenville, NC; a special caregiver, Judy Andrews, along with a host of nieces, nephews, and friends.

The family of Deacon John Lee Dugger created this Life Tributes page to make it easy to share your memories.

Send flowers to the Dugger family.