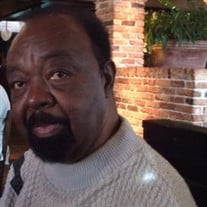 Joe Cecil Daniels was born on February 1, 1947 in Pitt County to the late Malissa and the late Eddie Mack Daniels, Sr. He departed this life on February 19, 2019 at Vidant Medical Center in Greenville, NC. Joe attended and graduated from Bethel... View Obituary & Service Information

The family of Mr. Joe Cecil Daniels created this Life Tributes page to make it easy to share your memories.

Send flowers to the Daniels family.