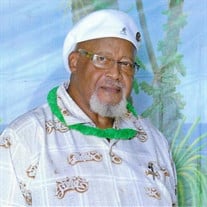 In his infinite wisdom and gentle grace of Almighty God reached down from Heaven above and whispered ever so quietly to one of his children these words….”Come with me my child, for it is time to go home”. God gently closed the eyes of our beloved Jesse and carried him home on May 6, 2019, 10:48PM at Vidant Hospice, Greenville, NC. Jesse Barrow Holliday was born on November 5, 1943 as the sixth child of ten born to the late James Thomas and Reatha Mae Barrow Holliday in Greenville, NC. He spent his early years in the Greenville community. Jesse graduated from C.M. Eppes High School in 1962. He then relocated to Maryland where he spent more than forty years. Jesse continued his education at Howard University. In addition, he completed mechanic training with the Maryland Department of Transportation, the United Postal Service and food services training with Marriott Food Services. Jesse had a genuine love for his family. He was committed to attending every family reunion. As an avid traveler, lover of fast cars, and family man, Jesse and his brothers created CB call handles to caravan across the states. Jesse, known as “Big O” would start out leading brothers Nathaniel, “Red Eye”, and William, “The Hound Dog”. Cooking was also one of his passions. Jesse enjoyed preparing meals for his family members and catering for various activities. His love extended to his nieces, nephews, in-laws, church family and his neighbors. Jesse and his wife, the late Pauline Green retired and moved to Ayden, NC. He provided care for her until her death. They became faithful members of St. Mary Missionary Baptist Church, Greenville, NC. He enjoyed serving on the dining committee and participating in the worship service. He was well-known for his testimonies on the goodness of the Lord. Jesse was active in the AARP and worked as a substitute custodian in various Pitt County Schools. Jesse is survived by his fiancé, Veronica W. Roberson; two daughters, Marsha Holliday (Daniel) of Clinton, MD, Karen Holliday of Stafford, VA; one step daughter, Gigi Washington (Barry) of Upper Marlboro, MD; three sisters, Evora McGlone of Virginia Beach, VA, Reatha Corbett of Moreno Valley, CA, Pearlie Holliday of Perris, CA; four brothers, Clifton Holliday (Carol) of Los Angeles, CA, William Holliday of Greenville, NC, Nathaniel Holliday (Letha) of Baltimore, MD; Ricky of Greenville, NC; eight grandchildren, Mercede, Dominique, Dominic, Danielle, Jeremy, Michayla, Erica, Michael II; seven great-grandchildren, McKhenzie, Mekhi, HaZyian, Madison, Mason, Maddox and Marli; a host of nieces, nephews, cousins, neighbors and friends. Scripture of Comfort Jeremiah 29:11 “For I know the thoughts that I think toward you, saith the Lord, thoughts of peace, and not of evil, to give you an expected end”.

In his infinite wisdom and gentle grace of Almighty God reached down from Heaven above and whispered ever so quietly to one of his children these words&#8230;.&#8221;Come with me my child, for it is time to go home&#8221;. God gently closed... View Obituary & Service Information

The family of Mr. Jesse Barrow Holliday created this Life Tributes page to make it easy to share your memories.

In his infinite wisdom and gentle grace of Almighty God reached...

Send flowers to the Holliday family.