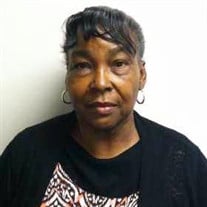 On Saturday, March 13, 2021 Heavenly Father called home Janie Adell Edwards Wright, 81, of Norwalk, CT. She was a courageous, intelligent, beautiful, and talented woman who gave a warm smile to those she met. She loved and looked after her family... View Obituary & Service Information

The family of Ms. Janie E. Wright created this Life Tributes page to make it easy to share your memories.

Send flowers to the Wright family.