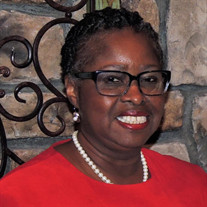 Janice Carter was born October 5, 1951 in Brooklyn NY to the late Clarence and Naomi Isler. She departed this life on Tuesday, May 11, 2021. Janice received her formal education in the public-school system of Brooklyn, NY. She received multiple certifications, achievements, and honors. Janice worked at LaGuardia Hospital at age 19. Janice knew the importance of hardwork. She continued her education at Manhattan College and became a supervisor in 1985. She also worked at Bronx Lebanon Hospital part time. Although Janice retired at an early age, we all know she couldn’t sit down. After moving to North Carolina she became a host attendant at Vidant Health Care for twelve years. Janice came from a family that believed in serving God. At an early age she gave her life to Christ and became a faithful member of The First Baptist Church of Crown Heights where she served on various Boards until she relocated to North Carolina in 2001. Upon relocating to Greenville, NC, Janice joined White Oak Missionary Baptist Church where she received a membership certificate from Women Empowerment movement and taught Sunday School. She then became a member of New Dimension Community Church where she served as a Deaconess and Sunday School Teacher. Whatever she found to do within the Church she did with joy and dedication. Janice had an unwavering love for her daughter, Marshannon. Their relationship was one of a kind. She loved being a mother. Janice gained her one and only son, Treymaine Carter when she married William Carter on November 26, 1988. Janice was a calm and peaceful person that always had a smile on her face. Janice was affectionately known as “Mama” to her grandchildren. Janice was preceded in death by her sisters, Carol Crayton, Pamela Smith and Michelle Isler. Those left to cherish precious memories of Janice is her husband, William Carter; her daughter, Marshannon Tweedy; her son-inlaw, Brian; her son, Treymaine Carter; sisters, Naomi Isler, Clarice Askew; brothers, Clarence and Michael Isler; a host of sisters and brother in laws; grandchildren, Brian, Ambria, Isis, Tatanisha, Joshua, Gabriel Tweedy, Felonna Carter; great grandchildren, Caden, Jayden and Jahlani; aunts, uncles, nieces, nephews; a host of cousins and friends; her very best friends, Barbara Peterson and Patricia Singleton Brown; her special friends, Elizabeth Grant, Marlene Golding, Gloria Hill and Carline; her two babies, Moe and Cookie.

Janice Carter was born October 5, 1951 in Brooklyn NY to the late Clarence and Naomi Isler. She departed this life on Tuesday, May 11, 2021. Janice received her formal education in the public-school system of Brooklyn, NY. She received multiple... View Obituary & Service Information

The family of Mrs. Janice Isler Carter created this Life Tributes page to make it easy to share your memories.

Send flowers to the Carter family.