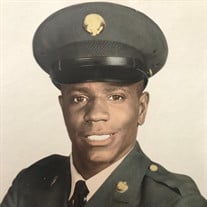 James Russell Saunders was born October 1, 1943 in Norfolk, Virginia to the late William Henry Saunders and the late Bernestine Moore Saunders. He departed this life on Saturday, August 22, 2020 at Vidant Beaufort Hospital in Washington, NC. Russell, as he was affectionately called by his family and friends, served in the US Army and was a Vietnam War Veteran. He was a faithful member of Roberson Missionary Baptist Church where he sang with the male choir "The Voices of Thunder" until his health declined. Russell was preceded in death by both his parents, William Henry and Bernestine Saunders; one son, James Moore; his very devoted and faithful uncle, Alge Lee Moore, Sr, who was his caretaker until health declined him. Russell leaves to cherish his memory his three children, Shelby Askew-Aiken (Alex) of Winterville, NC, James Farentino Morning (Darlene) of Richmond, VA, LaWanda Denise Saunders-Bland (Lamont) of Williamston, NC; three sisters, Jeanette M. Modica (Theodore) of Wake Forest, NC, Amy Marshall-Brown (James) of Tarboro, NC and Maria D. Marshall of Rocky Mount, NC; one brother, Jimmy Briley (Tammy) of Norfolk, VA; nine grandchildren; sixteen great grandchildren; two aunts; Helen Moore of , Edna L. Council of Robersonville, NC; one uncle; Robert C. Moore, Sr (Rose) of Baltimore, MD; a host of nieces, nephews, cousins, other relatives and friends. When you pass through the waters, I will be with you; And through the rivers, they shall not overflow you. When you walk through the fire, you shall not be burned, Nor shall the flame scorch you. Isiah 43:2

The family of Mr. James Russell Saunders created this Life Tributes page to make it easy to share your memories.

Send flowers to the Saunders family.