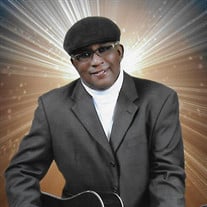 My little children let us not love in words. Neither in tongue but in deed and in truth. 1 John 3:18 He, whose name was James Earl Rodgers aka “Frog” was born on June 23, 1941 to the late Jasper Rodgers and the late Frances Biggs. On December 17, 2020 James Rodgers was called home to take his final rest at Vidant Medical Center in Greenville, NC. James attended school in Martin County where he met his high school sweetheart Verna Bridgers. They married and continued their journey of love for sixty-one years and knew each other for sixty-three years. James and Verna had ten children that they loved and protected with everything in them. James always kept you laughing with jokes that would brighten up your day not to mention dancing. James would dance circles around you, he never attended an event that he would not dance and steal the show. James was a family man and made sure his Diamond was taken care of, so she could provide for her family. The definition of a true man, he was a hard worker. James was given ten fingers to ensure that whatever job he came up against could be done at ease. He reared all his children to be strong, responsible and live every day as if it was their last. James had plenty of hobbies which included fishing and playing pool. He could eight ball, nine ball with his eyes closed. If you played him, he would always out school you making you think you was winning. But the minute you missed a shot James would run that table, like water running from a faucet. James was a very wise man and never sugar coated anything. If you didn’t want to know the truth please don’t ask “Mr. J” he had no problem telling you how it was or if you was wrong then he would look at you and say ”now what you think” with a smile. One of James strongest strength was repairing cars. His weakness that would keep us laughing when it came to the kitchen was, he couldn’t cook a lick, but he tried. If his wife didn’t prepare supper he would not eat. James would tell his children wipe them tears away, I love you and I will keep you all in my heart. James touched many lives near and far very supportive of friends and family. James best friend and pool partner was Charlie Ray together were two peas in a pod. James was preceded in death by his daughter, Sarah Rodgers; three brothers, J.C. Biggs, Jackie Roberson and Robert Brown. James precious memories and love will be missed by his wife and companion, Verna Rodgers of sixty-three years; his girls, Janice “Bird Legs” Rodgers of Brooklyn, NY, Angela “Lump” Rodgers, Frances “Mommie” Rodgers both of Williamston, NC, Joanna Rodgers (Ronnie) of St. Albans, Queen, Sherrone Spruill (Levi) of Williamston, NC, Shanicua “Mooka” Detres of Williamston, NC; his boys, Sammy Rodgers, Jasper Rodgers (Lisa), James Rodgers (Denise) all of Williamston, NC; one hundred twenty-six plus grandchildren, several great-grands that he loved dearly; sisters, Nellie “Pudding” Wiggins of Williamston, NC, Debis Brown, Annie Thompson both of Ayden, NC, Uzly Roberson of Connecticut; brothers, Milton Dean Roberson (Janice), Freddy Roberson both of Ayden, NC, a host nieces, nephews, other relatives and friends.

My little children let us not love in words. Neither in tongue but in deed and in truth. 1 John 3:18 He, whose name was James Earl Rodgers aka &#8220;Frog&#8221; was born on June 23, 1941 to the late Jasper Rodgers and the late Frances Biggs.... View Obituary & Service Information

The family of Mr. James Rodgers created this Life Tributes page to make it easy to share your memories.

My little children let us not love in words. Neither in tongue...

Send flowers to the Rodgers family.