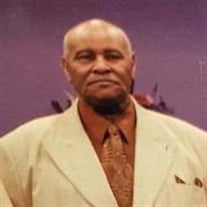 A Time to Be Born - James Lester Little, the son of the late Alphonza Little, Sr. and Margaret Woolard Little was born November 1, 1938 in Martin County, North Carolina. A Time to Grow - James attended Martin County schools and moved to New Jersey to begin his vocation at the early age of sixteen. He lived there for twenty five years before relocating to Florida continuing his role of supervisor at different companies. A Time to Serve - Being quiet and easy going. James never engaged in troublesome matters. He worked in various occupations before returning home. A Time to Rejoice - Having returned to Williamston, NC in 2005, James happily reunited with his family. He met his wife and united in holy matrimony April 18, 2009. He always has a special glow and sense of happiness when he was with his wife. Their togetherness permeated sheer joy. A Time to Worship - Having growing up in a Christian home, James accepted the Lord as his personal Savior and was a member of Cedar Hill Missionary Baptist Church. A Time to Rest - James transitioned from labor to reward at Vidant Hospital in Washington, NC, on Thursday, March 29, 2019. We are saddened to lose our loved one today, but we bid him farewell. Our time is not God's time. So as there is a "time for everything under the heaven", we can only accept his departure with the hope of being reunited with him again. A Time to Mourn - James Lester Little leaves to cherish his memories, wife, Helene Lions Little of Williamston, NC; children, Robbie Little (Loretta) of Connecticut, Vernita Scott (John) of New Jersey, Annetta Taylor (Roosevelt) of Williamston, NC, Jamie Little (Kim) of New Jersey, Vincent Little of New Jersey, Cedric Brown (Aisha) of Pennsylvania; several grandchildren and great grandchildren; brother, Louis Little (Elsie) of Greenville, NC; sisters, Rubye Roberson of Williamston, NC, Hazel Purvis (Harry) of Williamston, NC; sisters-in-law, Linda Bond of Indian Woods, Della Little of Williamston, NC, Glenda Little of Williamston, NC; brother-in-law, Alton Midgette of Maryland; a host of nieces, nephews and relatives.

The family of Mr. James Lester Little created this Life Tributes page to make it easy to share your memories.

A Time to Be Born - James Lester Little, the son of the late...

Send flowers to the Little family.