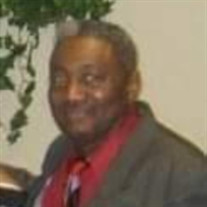 James Atkinson affectionately known as “Little Luke” was born on August 26, 1935 in Bethel, NC to the late Ada (Jones) and Mark Atkinson. He passed away on February 16, 2021 in Danbury, CT. James was married for over 20 years to the love of his life, Mildred Redmond Atkinson to this union four children were born. James was a faithful member of Mt. Pleasant A.M.E Zion Church where he served as a Trustee for many years, until his health begin to fail. There were some things we knew for certain; James was trustworthy, and he knew about some money. James was a person that loved his family and friends. His faithfulness to those whose corner he was in was a blessing. When all else failed, if you needed him, he was there. He was smooth with his words and had a mannerism that would light up any room. If James was in your presence you could be assured that you would laugh uncontrollably with stories from the past and present. That’s only a small part of why we will miss him so much. james was preceded in death by his wife, Mildred R. Atkinson; his only son, Anthony “Tony” Atkinson; along with his siblings, John, Farney, Willie, Mark, Lucille, Sally, Dorothy and Shirley. James leaves to cherish his memory and continue his legacy three loving daughters, Alicia Atkinson, Ashbernette Atkinson, Angelina Atkinson all of Connecticut; one sister, Ada Highsmith of Greenville, NC; brother, Clarence Atkinson (Geraldine) of Greenville, NC; brother-in-law, Clifton E. Rowls of Washington DC; four sisters-in-law, Lucy Pace of Virginia Beach, VA, Annie Mildred Davis (George) of Greenville, NC, Willie Maude Atkinson of Gloucester, VA, and Lillian Redmond of Williamston, NC; Godson, Elmer Harrison Jr.; four very special children, Angela Harris, Tuwanna Harrison, Bobby Cowan, Cedric Ward (Lisa); nine grandchildren; nine great grandchildren; along with a host of nieces, nephews, other relatives and friends. Whoever is generous to the poor lends to the Lord, and he will repay him for his deed. Proverbs 19:17

The family of Mr. James Atkinson created this Life Tributes page to make it easy to share your memories.

Send flowers to the Atkinson family.