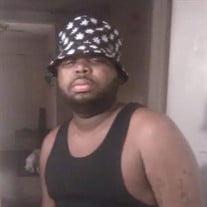 Jahmil Sincere Hyman aka &#8220;J-Mills, Mills and Peanut&#8221; was born on August 31, 1987 to Miriam Hyman and Keith Jenkins. He departed this life on Sunday, December 8, 2019 in Greenville, NC at the age of 32. Jahmil enjoyed fishing with... View Obituary & Service Information

The family of Mr. Jahmil Hyman created this Life Tributes page to make it easy to share your memories.

Jahmil Sincere Hyman aka “J-Mills, Mills and Peanut” was
born...

Send flowers to the Hyman family.