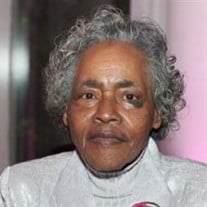 Mrs. Ida White (nee Staton) died surrounded by loved ones at Naval Medical Center Camp Lejeune on the morning of December 29, 2019, in Jacksonville, North Carolina at the age of 90. Ida was born in May 1929 in Oak City, NC, to the Reverend Wheeler and Hattie Staton (nee Williams) She graduated from WC Chance High School in Robersonville, NC, in 1944 at the age of 15 and matriculated at Elizabeth City State Teachers College (now Elizabeth City State University), graduating with a Bachelor’s degree in 1948, whereupon she moved back to Martin County and began a career as a teacher in Martin and Halifax County Public Schools. In 1954, she married her husband, David, whom she had met during college. His career in the Army saw them live around the world, including places such as France and Japan. She eventually returned home to Oak City and was an active member of St. Mark Baptist Church where she taught Sunday School for over 30 years. She was active in her community, spreading her love of Christ, contributing to various charities and community organizations, sharing the yields of her garden, and showing her family and friends what she meant when she said, “love is an action word.” She is preceded in death by her husband, David White, Sr. of Scotland Neck, NC; her parents, Wheeler and Hattie Staton; her siblings, Mildred Parker, Anne Marrow, Nathan Staton, Precious Jones, Sarah Pete and Wheeler Staton, all of Oak City, NC. Ida is survived by her loving sisters, Doris Wallace of Everetts, NC, Armecia Bryant of Williamsburg, VA; her doting children, David “Butch” White, Jr. and his wife, Patricia of Williamston, NC, Lori Pringle of Jacksonville, NC, Dwayne “Andre” White of Salisbury, NC, and Kyle “Kip” White and his wife, Toysha of Chocowinity, NC; her adoring grandchildren, Aimee Peoples and her husband, Jesse of Washington, DC, Randy “Tony” Pringle Jr. of Richmond, VA, Kyle “Kippy” White Jr. of Williamston, NC, Cameron White of Williamston, NC; great-grandson David Peoples of Washington, DC; a host of nieces, nephews, other relatives, and friends.

Mrs. Ida White (nee Staton) died surrounded by loved ones at Naval Medical Center Camp Lejeune on the morning of December 29, 2019, in Jacksonville, North Carolina at the age of 90. Ida was born in May 1929 in Oak City, NC, to the Reverend... View Obituary & Service Information

The family of Ms. Ida White created this Life Tributes page to make it easy to share your memories.

Send flowers to the White family.