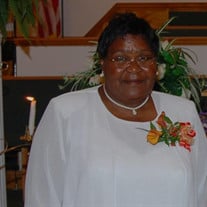 Hilda Mae Goddard was born on June 4, 1942 to the late Ralph and Erma Lee Barnes in Martin County. She departed this life on Monday, January 11, 2021 at her home. Hilda aka &#8220;Sissy Gal&#8221; lived in Robersonville and attended Martin... View Obituary & Service Information

The family of Ms. Hilda Goddard created this Life Tributes page to make it easy to share your memories.

Send flowers to the Goddard family.