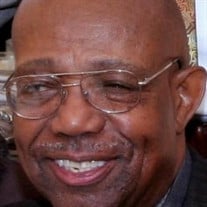 Herbert “Tip” Everett, Jr., son of the late Herbert Everett, Sr. and Lenora Sherrod Everett, was born on July 27, 1937, in Edgecombe County. He departed this life on June 19, 2021. “Tip” attended the public schools in Williamston, North Carolina. Early in his life, he migrated to Stamford, CT where he worked in various occupations. While living there for almost forty years, he formed numerous life-long friendships. He returned to Williamston in 1994 and took over the Everett Taxi Service until his retirement. Many of his friends and family members doubted that he would remain in Williamson very long, but to their surprise he remained until his death. “Tip” was united in Holy Matrimony to the late Burnett Coney. Although there were no biological children born to this union, Tip was the father of three, Terry Reddick, Sandra Blue and Tremagne Hutchinson and a surrogate father to so many more during his lifetime. “Tip” was predeceased in death by his wife; one daughter, Sandra Blue; his parents; one brother, Charles T. Bell. “Tip” leaves to cherish his memories, sons, Terry Reddick (Tonya) of Richmond, VA, Tremagne Hutchinson (Cheneba) of Columbia, SC; brothers, Dallas Everett (Kay) of Hillside, NJ and Franklin Everett (Sheila) of Williamston, NC; sisters-in-law, Annie M. Bell of Baltimore, MD, LaMuriel Everett of Williamston, NC; fifteen grandchildren , twenty-two great-grandchildren and a host of other relatives and friends.

The family of Mr. Herbert Everett Jr created this Life Tributes page to make it easy to share your memories.

Send flowers to the Everett family.