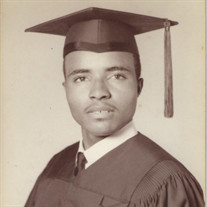 Harrison Harkley Jr. was born on May 10, 1949 in Craven County, Havelock, NC to Harrison and Cora Harkley. Harrison Harkley transitioned on June 19, 2020. After high school, he was employed by Greenville Utilities Commission. He was married... View Obituary & Service Information

The family of Mr. Harrison Harkley, Jr. created this Life Tributes page to make it easy to share your memories.

Send flowers to the Harkley, family.