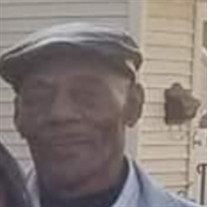 Grady Norris Farmer was born on June 7, 1948 to the late George Henry Farmer and the late Ervie Dean Jenkins in Edgecombe County. He departed his life on Tuesday, August 26, 2020 at 10:30pm at Vidant Hospital in Palliative Care under Hospice... View Obituary & Service Information

The family of Mr. Grady Farmer created this Life Tributes page to make it easy to share your memories.

Send flowers to the Farmer family.