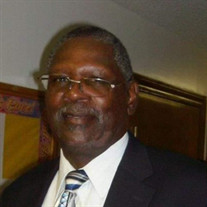 A Time To Be Born On August 13, 1950, George entered this world. He was born to Gladiola Davis Grimes in Greenville, North Carolina. A Time To Laugh George had a joyous childhood. Quiet, but mischievous. He attended the local schools. A Time To Love and a Time to Be Loved He married his soulmate on November 23, 1985. For 34 years they continued this union until her passing 2 years ago. A Time of Rebirth George accepted the Lord and was Baptized on February 07, 1982 at Saint Mary Missionary Baptist Church. He decided there was nothing better than living for the “Lord”. He became a Deacon on December 15, 2002. A Time To Live George lived well as a trusted “servant” of the Lord. He teaches Jesus and His goodness and love. George was a cheerleader for the Lord, always grateful and full of thanksgiving and Praise. He worked as a bricklayer for more than 40 years for East Carolina Masonry Inc. He was a mentor and a teacher. He loved and was loved by all those who knew him. A Time To Mourn He was preceded in death by his mother, his wife Verna, four brothers, Gene Davis, Isaiah (Jenell), Dallas, Samuel Grimes; one sister, Patricia Grimes. He is survived by one stepson, James Melton Jenkins (Saundrea) of Pennsylvania; one grandson, James Jenkins Jr; one grand-daughter, Krystna Audin, both of NY; two brothers, Hugh Grimes (Lois) and Terry Grimes; four sisters, Eleanor G. Howard, Deborah Powell (Laddie) of Greenville, NC, Linda F. Harding (Guy) of Chocowinity, NC, Doris Gooding (Charles) of Greenville, NC; three sister-in-laws, Diane Barnes (Willie), Catherine P. Grimes and Lois Grimes and a host of nieces, nephews and cousins and friends. A Time to Die George left his earthly home on Tuesday, July 13, 2021, to await his heavenly entrance. “To Be Absent From The Body, Is To Be Present with The Lord.” 2 Corinthians 5:8

A Time To Be Born On August 13, 1950, George entered this world. He was born to Gladiola Davis Grimes in Greenville, North Carolina. A Time To Laugh George had a joyous childhood. Quiet, but mischievous. He attended the local schools. A Time... View Obituary & Service Information

The family of Mr. George Grimes created this Life Tributes page to make it easy to share your memories.