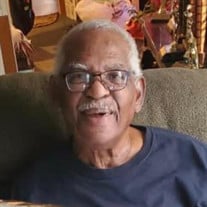 Gene Alton Burns was born on August 2, 1940, to the late Willie Burns and Nolie Little Burns. He departed this life on Wednesday, March 2, 2022, at Vidant Edgecombe Hospital in Tarboro, NC. He was the youngest of seven children who preceded him in death, Mary “Sis” Grimes (Ned), Artist “Duke” Burns (Eula), Willie “Buddy” Burns (Vernell), Johnny Burns (Janie), Garland Burns (Hattie) and Delores “Polly” Congleton Purvis (Arthur). Left with special memories of his life are three children, Brenda Lawrence (Donnell) of Williamston, NC; two sons, Dexter Jones of Robersonville, NC and Larry Daniel of Robersonville, NC; four step children, Betty Harrison (Henry) of Rocky Mount, NC, Janet Daniels (Donnell) of Rocky Mount, NC, Brenda Bell (Jerome) of Pinetops, NC, and Charlie Dickens III (Carol) of Rocky Mount NC; god-daughter, Deborah Battle (Chris) of Robersonville, NC; a bonus daughter, Cynthia Carr (Ray) of Robersonville, NC; three granddaughters, Patrice (Everett), Courtney, SurRayyah; two grandsons, Eddicus “DC” and Jeffrey; six great grandchildren; a host of nieces, nephews, cousins, relatives, and friends. Alton spent most of his early years between Martin and Pitt Counties. Shortly after leaving Martin County Schools, Alton moved to New Jersey. However, longing to be closer to his roots, he returned home and later married Ida Mae Daniels. Through this union, they were blessed with a daughter, Brenda, whom he lovingly nicknamed, “Cookie”. During this time, he was an employee of Robersonville Products. He was also an active member at Rock Hill Missionary Baptist Church and later held the office of Deacon. After a period of transitioning, he relocated to Tarboro, North Carolina. While in Tarboro, he became an employee of Carlisle Plastics in Battleboro, NC until retirement. During this time, he also met and married Marjorie Dickens who proceeded him in death. After Marjorie’s death, Alton moved in with his daughter and son-n-law where he remained until his untimely passing. He truly believed in the value of family and was happiest whenever he was around his family, especially his daughter. It was common for Alton to reflect on the adventures of his brothers and sisters from his youth. Those stories ranged from working in the tobacco fields, dating, trading identifications to simply having a good joke. His love for his family continued to shine brightly as he would share humorous stories of them and himself even into their older ages. Because of his upbringing, love for people and his genuineness, he had a natural talent for getting people to talk, laugh and be themselves around him. Alton had a way that cannot be imitated and a laugh that cannot be duplicated. He touched so many people’s lives and would do whatever to help. He loved, was loved and will truly be missed by many.

Gene Alton Burns was born on August 2, 1940, to the late Willie Burns and Nolie Little Burns. He departed this life on Wednesday, March 2, 2022, at Vidant Edgecombe Hospital in Tarboro, NC. He was the youngest of seven children who preceded... View Obituary & Service Information

Send flowers to the Burns family.