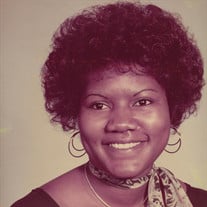 Evelyn Brenda Roberson Teele was born in Martin County, NC on March 19, 1951 to the late Samuel T. and Penny Roberson. She departed this life at the home on Saturday, May 4, 2019. Evelyn graduated from East End High School Class of 1969 and went on to serve three years in the Army. She also continued her education at Martin Community College where she received two degrees in business. Evelyn worked with the migrant seasonal farm workers association for twenty years and after retiring went on to work for the Martin County Department of Social Service. Evelyn’s love story begins at East End School. She was sitting on the bleachers in the gym. Her eyes gazed upon this little shy young man to throw popcorn at his head to get his attention. When he turned around, he saw this pretty young girl and he decided to put aside his shyness and go for this girl. From that point was the beginning of a beautiful love story that lasted over forty years. Larry Teele was the young man’s name, and he loved her like her father loved her mother. After high school, she went to the Army and he went on to pursue his college career, but they continue their love affair which ended up in marriage. They both pledged to love each other until death due them part, and they kept this pledge. From this union, two children were born. Qyati, the oldest preceded her in death, and Travanti, her baby and look alike. She loved those boys dearly and hovered over them like a hen does her baby chicks. She would have done anything for either one of them. One of Evelyn’s greatest gifts was how she could use her hands to draw, cut, paint, build and design images from pictures in her mind. Her favorite time of the year was Christmas and she created one of the most beautiful yards in the area with her original patterns which could not be duplicated. She loved this hobby and took pride in it. To God be the Glory for her life and she will always be remembered. Evelyn leaves to cherish her precious memories, her devoted husband, Larry Teele and son, Travante’ Teele of the home, Everetts, NC; three sisters, Dorothy Moore of Robersonville, NC, Dr. Vera Alexander of Robersonville, NC, Jeannie Alston of Rocky Mount, NC; one brother, Faeroes Roberson of Robersonville, NC; three aunts, Melvina Wilson of Baltimore, MD, Dorothy Brown of Baltimore, MD, Gladys Briley of Maryland; one uncle, Ronnie Roberson (Maxine) of Brooklyn, NY; three sisters-in-law, Bertha Teele of Williamston, NC, Valerie Joyner of Everetts, NC, Villa Andrews of Williamston, NC; one brother-in-law, James Teele of Lynchburg, VA; a host of nieces, nephews, cousins and friends.

Evelyn Brenda Roberson Teele was born in Martin County, NC on March 19, 1951 to the late Samuel T. and Penny Roberson. She departed this life at the home on Saturday, May 4, 2019. Evelyn graduated from East End High School Class of 1969 and... View Obituary & Service Information

The family of Ms. Evelyn Brenda Teele created this Life Tributes page to make it easy to share your memories.

Send flowers to the Teele family.