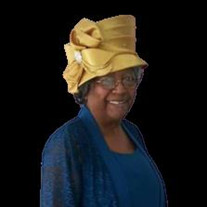 Pastor Evelyn Jean Marshall, daughter of the late RD Robinson and Eleanor Murray was born on November 11, 1937 in Stokes, North Carolina. She was the third of nine children and is survived by three siblings: Twelvelyon Johnson, Thelma Ross, and Daniel Murray. She was 82 years of age when she departed this life on September 5, 2020. Pastor Marshall was called into the ministry in 1976 and was ordained Evangelist in 1977. The ministry to which God called her took her to international levels such as Canada and Jamaica, and across the United States. Preaching and conducting revivals were two loves of her life. In addition to preaching, Pastor Marshall hosted small group home-based Bible stud-ies where she taught the Word on a more personal level in addition to discipling young believers to maturity in Christ. She also sang with a fairly notable group at the time called “The Sons and Daughters of Israel”. Pastor Marshall was commissioned by the church to the office of Pastor on August 20, 1984, and God’s Remnant Church of Christ was formulated shortly thereafter. It was her love for souls and commitment to the path God chose for her that got her there. And in response to the call, she lovingly and faithfully served as the Shepherd of this portion of God’s people through June 2020. Her passion and drive to serve the Lord were evident in her life. If one wanted to see what Psalms 34:1, “I will bless the Lord at all times: his praise shall continually be in my mouth.” looks like in the flesh, Pastor Marshall was it. One of her famous saying was: “Tell the Lord thank you”, and she meant it. Pastor Marshall was an accomplished and gifted seamstress by profession. She worked for Tarlow’s Fur of Baltimore, Maryland and retired after 20 years of service. If it could be worn, Pastor Marshall could make it or tailor it to fit. Even after retiring, Pastor Marshall blessed many in and outside her family with many yields from her sewing room. On June 16, 1957 Pastor Marshall married the love of her life, Leon Paul Marshall. They were married for 63 years when Leon proceeded her in death on June 25, 2020. During their union they were blessed to raise nine children, Dwight Marshall, Linwood Marshall, Angela Marshall, Larry Marshall, Dennis Marshall, Ronald Marshall, Tyronda Marshall, Tanika Marshall, and Shanika Marshall. Pastor Marshall loved her husband and children unconditionally. But she often said that her love was for God, the Church, and her family in that order. She was a woman of integrity; a hard worker with impeccable work ethics; honest; and a good listener and counselor. Most importantly, she was a woman of resilient faith. Her message in life was to always witness and lead others to Christ. She often sang the song “I’m a Solider in the Army of the Lord” when she ministered and that she was for the past 60 years. Pastor Marshall, referred to by many as Jean and by fewer as Evelyn leaves two sisters; one brother; nine children; 23 grandchildren; 89 great-grandchildren; 13 great-great-grandchildren; a host of family and friends to cherish her memory.

Pastor Evelyn Jean Marshall, daughter of the late RD Robinson and Eleanor Murray was born on November 11, 1937 in Stokes, North Carolina. She was the third of nine children and is survived by three siblings: Twelvelyon Johnson, Thelma Ross,... View Obituary & Service Information

The family of Mrs. Evelyn J. Marshall created this Life Tributes page to make it easy to share your memories.

Send flowers to the Marshall family.