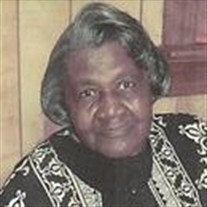 MOTHER ERNESTINE TYSON SMITH, daughter of the late Ernest and Sarah Wooten Tyson Dupree was born January 1, 1929 in Pitt County, where she lived her entire life. Surrounded by family, Tine, as she was affectionately called, entered into eternal rest on Wednesday, February 6, 2019 at the Red Oak Assisted Living Facility. Mother Smith attended the Pitt County Schools. Prior to retirement, she worked seasonal jobs at local tobacco factories for many years. Mother Smith’s first Christian experience was with the Sycamore Hill Missionary Baptist Church. She later joined Mt. Calvary FWB Church and served on the Rosebud Usher Board. She loved Sunday School. Tine later joined and served at Progressive OFWB Church. It was at the Church of Prophecy that Pastor Dennis Taft observed her walk with the Lord and concentrated her a Mother on June 10, 2007. Mother Smith loved the Lord and was a strong woman of God with a gift of faith. Her favorite scripture was Psalm 31; and she would recite it, every opportunity, even recently. Mother Smith was a very loving person and would do anything to help anyone. She was a very independent person. Even as a resident of Red Oak Assisted Living Facility, she would refuse help, desiring to do all she could for herself, as long as she could. At her very own discretion, she had been a resident of the Red Oak Assisted Living Facility since September 2012. Though Mother Smith did not have biological children, she invested much in mothering other children, to include, but not limited to her nieces, nephews and her god daughter, Christina Jones and others. Mother Smith was preceded in death by her husband, the late Ray Smith, her parents and several siblings. Mother Smith leaves to mourn her passing and cherish her memories, one sister, Shirley Ebron-Rountree of Greenville, NC; a special nephew, James Ebron III of Raleigh, NC; several other dedicated, devoted, and loving nieces, nephews, cousins, other relatives and friends.

MOTHER ERNESTINE TYSON SMITH, daughter of the late Ernest and Sarah Wooten Tyson Dupree was born January 1, 1929 in Pitt County, where she lived her entire life. Surrounded by family, Tine, as she was affectionately called, entered into eternal... View Obituary & Service Information

The family of Ms. Ernestine Smith created this Life Tributes page to make it easy to share your memories.

MOTHER ERNESTINE TYSON SMITH, daughter of the late Ernest and...

Send flowers to the Smith family.