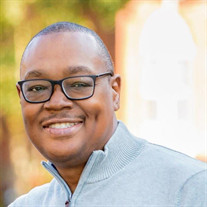 Eric Antonio Brown was the fourth son born to Leroy and Shirley Brown. He began his earthly sojourn on 19 December 1967 at Pitt County Memorial Hospital and transitioned to eternal sleep on 25 January 2021 at Vidant Medical Center. Eric matriculated through the Pitt County Public School System and graduated from Ayden Grifton High School in 1987. He completed coursework at North Carolina A & T State University and later at Pitt Community College. As a teenager, Eric worked at Andy’s Pool Room. As he cleaned and swept, he developed a keen interest in billiards. Eventually, that interest cultivated into a life-long passion for which he played with great skill and precision. As a child, Eric was a member of Morning Star Holiness Church, where he was active in the youth ministry. Eric joined Sycamore Hill Missionary Baptist Church January 29, 1996 and served diligently until his death. When moved by the spirit, he worshipped quietly with tears streaming down his face. Throughout the years, he served his church as a member of the Male Chorus, Senior Usher Board, Homeless Shelter Ministry, Kitchen Committee and Security Team. He thoroughly enjoyed his role as Usher, along with his fellow door keeper, Trustee Alton Harris. In 1994, Eric met the former Nicole Hairston; they were married December 7, 1996 and have shared a beautiful 26-year love story. To their union, one son, Adam Casey Brown was born. Eric strived to be the best father to Adam and was actively involved in all of his activities; scouts, sports, camping, fishing, church outings, school events, and was always requested to be the parent to accompany Adam’s classes on field trips. Eric was a devoted husband and doting father, and as everyone can attest, Eric loved Adam and Nicole! Eric had a colorful and larger-than-life personality and a brilliant smile. With the combination of his personality and smile, he never met a stranger. He befriended anyone with whom he met and he made that person feel welcome through his kindness, wit, and humor. Eric was generous with his time, treasure, and talent. He would travel the last full measure to help anyone who needed his assistance. Eric shared a unique relationship with all of his nieces and nephews. They all looked forward to spending time with him and he had a knack for making them feel special. Eric enjoyed reading and was well informed on a variety of topics. He loved spending time with family and could be found cooking on the grill at every family event. He enjoyed travelling, collecting sports cards, and was a “professional shopper. His favorite football team was Kansas City Chiefs; he was thrilled when they won the Super Bowl in 2020 and was excited about the prospect of them returning in 2021 (we know he’ll be watching). When the Master called, Eric passed quietly with Adam and Nicole by his side, right where they always were. Eric is survived by his mother, Shirley Adams Brown of Ayden, North Carolina, sons, Eric James McNair of Maryland, Adam Casey Brown of the home; god daughter, Aliya Hairston of High Point, NC and his loving and devoted wife, Nicole Hairston Brown. Additionally, Eric is survived by three brothers, Berry Brown (Deloris), of Fredericksburg, Va., Kerry Brown (Tammy) of Fredericksburg, Va., Monty C. Brown, Sr. (Dawn) of Winterville, NC; two sisters, Bernadette Roberson of New Haven, CT and Keisha A. Brown of Grimesland, NC; father and mother-in-law, Samuel and Dixie Hairston; brothers in law, Lashawn Hairston (Terri) and Lamonte Hairston (Karen). He leaves to cherish his memory, a host of aunts, uncles, nieces, nephews, cousins and friends.

The family of Mr. Eric Antonio Brown created this Life Tributes page to make it easy to share your memories.

Eric Antonio Brown was the fourth son born to Leroy and Shirley...