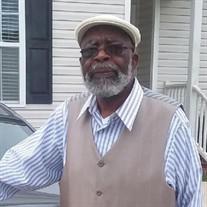 There will be no family visitation at the home due to COVID-19. Thank You for understanding. Eljean Hutchins was born on May 2, 1949 to the late Lucille Langston Bryant. He was raised in Parkstown, Wayne County, NC and graduated in 1967 from Woodington High School in Wayne County NC. After graduation he attended Fayetteville State University. He later moved to Washington DC with the love of his life, his wife of 53 years, Brenda Grace Hutchins with whom he had 3 children, Anthony, Marvin and Marlene. He was a skilled cement mason and was a member of the Washington DC Cement Masons Union. He always took great pride in his work and was a consummate leader and professional. In 1983, he moved his family to Kinston, NC so that his dear wife could be closer to her mother and 7 brothers. He continued to work as a cement mason for Everett Concrete and Construction until his retirement in 2008. In 2010, he joined the Koinonia Christian Center Church in Greenville, North Carolina under the leadership of Bishop Rosie S. O’neal and was baptized by his son Anthony who he proudly called “my Assistant Pastor”. Brother Hutchins or “Pop” as he was called served in the foodbank ministry helping to minister to the needs of others with a smile. He loved his church and was serious about being on time and witnessing to the Word. He was a man of wisdom and strength, a loving husband and father who taught many lessons to his children and others that have stayed with them throughout their lives. He was preceded in death by his wife, Brenda Grace Hutchins; his mother, Lucille Bryant; stepfather, Allen Earl Bryant; one brother, James Herman Cox. He leaves to cherish his memory, two sons, Rev. Anthony Hutchins (Traci) of Winterville, NC and Marvin Hutchins (Lekeysha) of Killeen, TX; one daughter, Marlene Hutchins of Greenville, NC. He will also be remembered by his four grandchildren, Malik, Benjamin, Maya, Mathew, Camari, Haisley and Elijah (by marriage); one brother, Walter Lee Hall; one sister, Louellen Calloway; along with a host of nieces, nephews, family and friends.

There will be no family visitation at the home due to COVID-19. Thank You for understanding. Eljean Hutchins was born on May 2, 1949 to the late Lucille Langston Bryant. He was raised in Parkstown, Wayne County, NC and graduated in 1967 from... View Obituary & Service Information

The family of Mr. Eljean Hutchins created this Life Tributes page to make it easy to share your memories.

There will be no family visitation at the home due to COVID-19....

Send flowers to the Hutchins family.