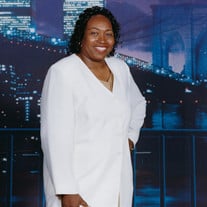 Elizabeth Ann Williams Harper, born July 15, 1950, passed away March 21, 2019 in her hometown of Greenville, NC. Born as the only child of the late Lizzie Duncan and Robert Williams, she spent the first twenty-five years of her life in Greenville. Ann, as she was best known, graduated from the Charles Montgomery Eppes High School in 1969, at the top of her class. She was a majorette and saxophone player in the Mighty Marching Bulldogs Band. Ann also attended North Carolina Central University, Durham, NC for two years. She then married her high school sweetheart James Harper, Jr. To this union, they added two wonderful children Rodney and Shandette. They traveled with him throughout his military career. Jim and Ann later divorced and she made her home in Hampton, VA. Ann worked as a Chapel Assistant at Langley AFB, VA and Wright Patterson AFB, OH Chapels. Ann also served as Wedding Coordinator at the both Chapels. Upon her return to the Hampton, VA area she became the wedding coordinator for LAFB, VA. For the last twenty-five years, she attended the Gospel Service on Langley AFB. Additionally, she worked as a retail specialist at the Speigel Distribution Center in Newport News, VA for more than eighteen years. Ann was preceded in death by her father, Robert Williams; her mother, Lizzie Duncan; her one-and-only sister, Jessie Mae Taft. Ann is survived by the loves of her life, her son, Rodney W. Harper; daughter, Shandette E. Harper; grandson, Bryce E. Harper; her devoted nieces, Barbara A. Taft and Peggy M. Taft; her adopted mother, Barbara L. Rivers; a lifelong mentor, Johnny A. Wooten; a host of nieces, nephews, other family and friends; special family members of the "Overtime" tailgaters of North Carolina A&T Stat University, Greensboro, NC.

Elizabeth Ann Williams Harper, born July 15, 1950, passed away March 21, 2019 in her hometown of Greenville, NC. Born as the only child of the late Lizzie Duncan and Robert Williams, she spent the first twenty-five years of her life in Greenville. Ann,... View Obituary & Service Information

The family of Mrs. Elizabeth Ann Williams Harper created this Life Tributes page to make it easy to share your memories.