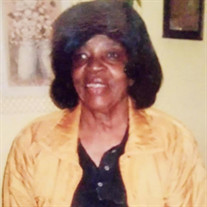 Ms. Elizabeth Whichard was born on September 28, 1937 to the late Claude and Jenny Whichard. Elizabeth went to be with the Lord on March 1, 2021 at Vidant Medical Center. Elizabeth was the 3rd eldest of 10 children. Elizabeth attended Pitt County... View Obituary & Service Information

The family of Ms. Elizabeth Whichard created this Life Tributes page to make it easy to share your memories.

Send flowers to the Whichard family.