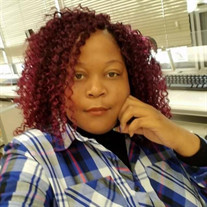 Ms. Elizabeth DeRosette Graham, 36, transitioned on April 23, 2021. Known as “Liz,” she was a sister, godmother, auntie, daughter, an inspiration to all she touched, a powerful voice for justice, an advocate for science, an unabashed nerd, and a true, amazing friend. Elizabeth was born in Greenville, NC on August 20, 1984, the youngest daughter to James Graham and Floretta JoAnn Casey Graham, and the little sister to Carlton and Alexander Smith, both of whom she is survived by. Diagnosed with sickle cell anemia from birth, she battled this disease all of her life, fighting through daily pain to graduate from East Carolina University with a degree in Bio Technology. It was her lifelong dream to graduate, and though she succeeded, her destiny to walk across the stage was cut short. It was her curiosity, her fighting spirit and her quirky, unquenchable need for information that led her to participate in several extracurricular activities, hobbies, and pursuits-- from cheerleading in grade school, to several activities at her church: Camp CARE, step teams, choir, and youth programs; and the sisterhood of the Eastern Stars to name a very few. She developed amazing friendships across many demographics and, though she could be quiet at times and fiery at others, was a central figure, the light and the gateway, for her both her blood family and chosen family. She coined a phrase “Never Ending Research and Development” whose acronym was N.E.R.D. or nerd, and she wore her geek-ness proudly. Video games, comics, wrestling, UNC basketball, movies, and of course music, particularly spiritual songs and the songs of Michael Jackson and the Jackson family, gave her solace. Her interest in mythology, science, history, fueled her intellect. Yes, she truly lived for a geek culture situation as these things empowered her to achieve her goals. Those things empowered and fueled her as a Sickle Cell Warrior. She fought diligently to help spread the knowledge of this disease that largely affects African descended people by participating in studies, helping found organizations, and posting on social media and in her general conversation. Elizabeth was driven to make the world know of sickle cell. The most important thing for Elizabeth was her family. She was always there with a ride, hug, kind word, donation, birthday gifts, advocacy. She cherished her role as Casey family historian and secretary, having a vast knowledge of where we, her blood family, come from. She could look at a photo from any Casey family reunion from decades gone and give you the names of everyone in that photo. As well, her chosen family also meant everything to her. She was auntie, play-cousin, godmother, mentor, and a light in the life of so many young people. She was, is, our sister

Ms. Elizabeth DeRosette Graham, 36, transitioned on April 23, 2021. Known as &#8220;Liz,&#8221; she was a sister, godmother, auntie, daughter, an inspiration to all she touched, a powerful voice for justice, an advocate for science, an unabashed... View Obituary & Service Information

The family of Ms. Elizabeth Graham created this Life Tributes page to make it easy to share your memories.

Send flowers to the Graham family.