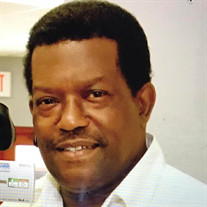 EDWARD “ED” FRANKLIN NOWELL entered this earth on August, 15, 1954. He gained his wings on Sunday, December 12, 2021. Ed, also known by his family as “Frank,” was the son of the late Mary “Ham” Bunch and the late James Nowell. He was born and raised in Colerain, North Carolina. After graduating from high school, he attended Elizabeth City State University in Elizabeth City, North Carolina, where he received a degree in Political Science. After graduating from college, he moved to the Washington DC area and worked for the FBI for several years. He later relocated to North Carolina and became a store manager for Pic N’ Pay shoe store. He was an incredible salesman and would later go on to sell mobile homes, as well as life insurance, but his true love was photography. He was a self-trained photographer and had a thriving photography business. He took professional pictures for people county and city wide. Taking pictures for family reunions, special events, weddings and more were his specialty. He was known throughout Greenville, NC as “the pitcha man!” He had the best sense of humor and could light up any room with his presence. Ed/Frank leaves to cherish his memory, his dear friend and partner, Brenda Kent of Greenville, NC; his son, Gerod Ruffin (Shameka) of Clayton, NC; one grandson, Christian Ruffin (mother, Hermione Graves)of Raleigh, NC; his daughter, Nicole Nowell (mother, Denise Nowell) of Greenville, North Carolina; one sister, Mary “Kate” Watford, of Ahoskie, NC; brothers, Marvin “Tang” Nowell (Caron), of Charlotte, NC, and Darrie Nowell, (Michele), of Phoenix, A; he also leaves his nieces, nephews; a host of other relatives and friends whom he loved and will miss him dearly. He was a genuine brother, uncle, cousin and friend. His laugh was infectious and presence on this earth will be forever remembered and missed tremendously.

The family of Mr. Edward Nowell created this Life Tributes page to make it easy to share your memories.

Send flowers to the Nowell family.