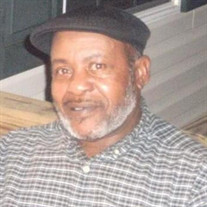 Earnest Martin was born on September 5, 1947 in Martin County to Columbus and Melissa Martin. He departed his life on Saturday, December 12, 2020 at his home. Earnest received his education from Martin County Schools. He worked for many years... View Obituary & Service Information

The family of Mr. Earnest Lee Martin created this Life Tributes page to make it easy to share your memories.

Earnest Martin was born on September 5, 1947 in
Martin County...

Send flowers to the Martin family.