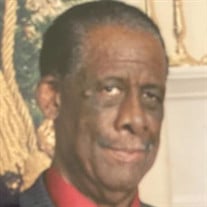 Earl L. Wallace, son of the late James and Annie Wallace, was born on December 15, 1929 in Everetts, N.C. On August 9, 2020, he entered his haven of rest at his home, which he has always cherished. Earl acquired his education in Martin County Schools. Earl worked for at least ten years at the Williamston Basket Factory as a supervisor. After that, he was employed at Burroughs Wellcome (now known as Thermo Fisher) as a Chemical Processor and retired in 1994. Earl and Doris Staton were high school sweethearts. They were married and spent nearly seventy years together. To this union, four children were born; Rhonda Wallace Tapp, Michael C. Wallace, Ellis I. Wallace, and Terry L. Wallace. Earl joined the Lily of the Valley Baptist Church in Everetts, N.C. at a very young age. He served as a Trustee until his health declined. Earl believed in his children receiving a good education, therefore all four of his children were afforded the opportunity to attend college. Earl received many certificates and awards from Burroughs Wellcome, the Lily of the Valley Baptist Church, and the Martin County Federal Credit Union, where he served as Chairman for two years. Earl was a great family man who loved his wife, his children and especially his grandchildren who always held a special place in his heart. The Lord blessed him with longevity and he was also a third generation grandparent. Earl precious memories will forever linger with the family, his loving wife, Doris S. Wallace of the home; his children, Charles Staton (Son) of Norman, Oklahoma, Rhonda Wallace Tapp (Larry) of Mebane, N.C., Michael C. Wallace (Hilda) of Durham, N.C., Ellis I. Wallace (Sheila) of Nashville, N.C., Terry L. Wallace of Charlotte, N.C.; his siblings, Bennie Wallace, Gloria Wallace Woolard, Elton Wallace (Louise), and Varah Wallace Hart (Thomas); his grandchildren, Earl J. Wallace, Ebony Wiedman (John), Dana Wallace, Charles Staton, Jr., Michael Wallace, II, Brandon Wallace, and Evan Wallace; his great- grandchildren, Daijah Stephenson (Shane), Camron Wallace, Carmon Wallace, Alania Wallace, and Donovan Earl Wallace; his great-great grandchildren, Charlie Wiedman, Zayne and Zoey Stephenson; as well as a host of special relatives and friends. “Sometimes our skies are cloudy and dreary, Sometimes our hearts are burdened with care; But we know, whatever befall us, Jesus is always there..”

Earl L. Wallace, son of the late James and Annie Wallace, was born on December 15, 1929 in Everetts, N.C. On August 9, 2020, he entered his haven of rest at his home, which he has always cherished. Earl acquired his education in Martin County... View Obituary & Service Information

The family of Mr. Earl L. Wallace created this Life Tributes page to make it easy to share your memories.

Earl L. Wallace, son of the late James and Annie Wallace, was...