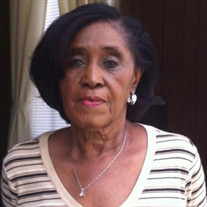 “For I am ready to be offered and the time of my departure is at hand. I have fought a good fight; I have finished my course; I have kept the faith.” 2: Timothy 4:6-7 Dorothy Lee Cherry Fields was born May 30, 1932 in Greenville, North Carolina to the late James and Gertrude Cherry. She was the youngest of four siblings that preceded her in death. Dorothy departed her life, Thursday, September 3, 2020 at Vidant Medical Center in Greenville, NC surrounded by loves ones. Dorothy, affectionately known as “DOT” or “Dorothy Lee”, was reared “Downtown” in a very close-knit community where she joined Sycamore Hill Missionary Baptist Church at a very early age. Dorothy has been a member of Sycamore Hill for 60-plus years. She enjoyed serving on the Homeless Shelter Ministry, attending Hour of Prayer on Tuesdays, and weekly Bible study. She also enjoyed attending Senior activities held at the church. Dorothy was educated in Pitt County Schools and graduated from C.M. Epps High School Class of 1953. Dorothy had a “passion for fashion”. She was the epitome of grace, style, and class. Because of her love for fashion, she pursed a career in the Retail/Fashion Industry. So many people would always compliment her on her style and flair. She was the ‘Coco Chanel’ of Greenville, North Carolina. As she would always say, I like ‘odd things.’ She was one of the first persons of color to work in a retail department store in Greenville, NC. She worked for Brody’s Department Store for several years as a Buyer and Sales Clerk. She retired from Belk’s Department Store in 1994. Dorothy Lee married her love, Walter Collins Fields, January 28, 1966. They were married for 54 years. To that union they were blessed with one daughter, Cherry Nicole Fields Clark. Dorothy was a faithful, genuine and devoted Wife, Mother, Grandmother and Friend. She loved her grandchildren, Nyla and Kaleb, dearly and they loved her too. They would affectionately call her ‘MA MA.” She would do ANYTHING for those grandchildren and her daughter. They brought her so much joy. Dorothy legacy will live on in the hearts of her husband, Walter Collins Fields of Greenville, North Carolina; daughter, Cherry Nicole Fields Clark (Keith) of Knightdale, North Carolina; grandchildren, Nyla and Kaleb Clark of Knightdale, North Carolina; a devoted nephew, Eric Hazelton (Wendy) of Greenville, North Carolina; her first cousin, Edward Cherry (Tarah) of Hamden, Connecticut; three sisters- in-law; Pastor Herlene Fields Streeter of Stanford, Connecticut, Dorothy Fields Germany of Raleigh, NC, and Shirley Fields of Garysburg, North Carolina; along with a host of nephews, nieces, great nieces and nephews, other relatives and dear friends.

The family of Mrs. Dorothy Cherry Fields created this Life Tributes page to make it easy to share your memories.

“For I am ready to be offered and the time of my departure is...

Send flowers to the Fields family.