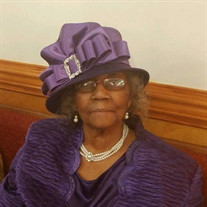 Doris Mildred Fannie Louise Salisbury Sheppard, daughter of James and Ida Salisbury, was born on Martin County, NC on May 14,1925. God in his infinite wisdom and unfailing power called her to her eternal home on May 6, 2019. "Muh", as she was affectionately called, was the third oldest of six children. She attended Post Oak School until the third grade before having to leave school in order to help her family. As a little girl, Doris became a self-taught seamstress, mending and making clothes to earn money. In her younger days, she dreamed of being a teacher and a "professional" seamstress. Little did she realize, she was both to many people in many different ways. In 1945, she married Johnny Lee Sheppard. She raised her children, two nieces and one nephew with love and care. Early in her life she accepted Christ and was baptized at Whichard Chapel Holiness Church in Stokes, NC. Later she became a member of Union Grove. A dedicated and faithful member of her church, she was appointed as a "Mother" of Union Grove. In addition to being a homemaker, she worked as a tenant farmer, a caretaker and became an accomplished seamstress. She spent decades sewing choir robes, bridesmaid dresses, suits and other fashions for so many in her community. Her work brought her happiness and valuable friendships that she would maintain throughout her life. She was known as a woman of grace with a stylish sense of fashion, which included the perfect accessories and matching Sunday hats ~ a signature look she maintain throughout the end. With just a third grade education, Doris was rarely confident in her knowledge, but she understood the power of her right to vote and she exercised it every chance she had, proudly using her curb-side voting when she could not longer walk in to do it. Most importantly, she encouraged others to do the same. She led by example and was the perfect model of parenting, grand parenting, unconditional love, humor, and inner strength. She will be profoundly missed by many. Doris's true joy in life were her children, grandchildren and extended relatives and church family. Their laughter and energy and the love she exhibited to them and the love that reciprocated undoubtedly added years to her life. She was preceded in death by her parents; her husband, Johnny Lee Sheppard; three sisters, Mary James, Ella James, Ella Johnson; one brother, James Salisbury. Left to cherish precious memories are her four children, Johnny Mack Little of Raeford, NC, Ann Teel (Mack) of Bethel, NC, Johnny Van Sheppard (Sylvia) of Saratoga, NC, Dorothy Vines of Wilson, NC; two nieces she raised, Clara Mae James of Mount Olive, NC, Ida Andrews of Gastonia, NC; one loving sister, Christine "Sis" Andrews of Greenville, NC;twenty-two grandchildren;thirty-six great-grandchildren;thirty-one great-great-grandchildren; four great-great-great-grandchildren; a host of family and friends.

Doris Mildred Fannie Louise Salisbury Sheppard, daughter of James and Ida Salisbury, was born on Martin County, NC on May 14,1925. God in his infinite wisdom and unfailing power called her to her eternal home on May 6, 2019. "Muh", as she was... View Obituary & Service Information

The family of Mrs. Doris Salisbury Sheppard created this Life Tributes page to make it easy to share your memories.

Send flowers to the Sheppard family.