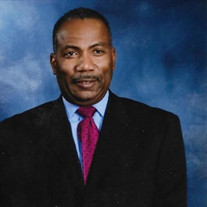 Dexter Levon Randolph was born on October 1, 1962, to the late Willie G. Randolph and Helen Sneed Randolph. On February 26, 2021, he passed away in the care of Vidant Medical Center in Greenville, North Carolina. Dexter graduated from North Pitt High School in 1980. After completing high school, he attended North Carolina Agricultural and Technical State University where he earned a Bachelor of Science in Industrial Technologies Manufacturing. Shortly after graduating in 1984, he moved to Baltimore, Maryland where he met Kristal, the love of his life who he affectionately called “Princess”. Kristal called him, “Pi”, because he was always so sweet. On November 16, 1991, the two were married. Not long after their marriage, Dexter and Kristal accepted the opportunity to move to Athlone, Ireland that was offered by Dexter’s employer, Ward Machinery. Their oldest son, Brandon Randolph, was born in Ireland in 1993. Years after returning from Ireland, they were blessed with their youngest son, Garrett Randolph, in 1998. After leaving Ward Machinery, Dexter filled leadership positions at Mack Trucks, Volvo Powertrain, and McCormick and Company, all of which he thoroughly enjoyed. Meanwhile, he earned two master’s degrees. In 2006, he earned a Master of Science in Management and in 2007, he obtained a Master of Business Administration from the University of Maryland University College. After he spent 37 years in Maryland, Dexter and Kristal moved to Bethel, North Carolina. During this time, Dexter worked at Cummins Engine Plant in Rocky Mount, North Carolina. Dexter was a good husband, a good father, and an overall good person. The name “Dexter ” comes from the word, “Dexterity”, which means to be skilled in performing tasks using the hands. This was very fitting. Whether he was fixing a carburetor or giving a pat on the back, Dexter had a skillful touch. In his free time, Dexter loved working on his cars, raising goats, fishing, and enjoying a good cowboy movie. He was also a proud member of the Kappa Alpha Psi fraternity, as well as a member of The New Psalmist Baptist Church in Baltimore, Maryland. In addition, he was also a part of the Maryland National Guard. Dexter so enjoyed spending time with his family. From VIP Nascar races to camping trips to Niagara Falls, Dexter truly found joy in showing his family what the world had to offer while giving them unforgettable once-in-a-lifetime experiences. Dexter also loved to travel for both business and leisure. He was blessed to travel to Sweden, France, London, Brazil, Wales, Germany, Scotland and the Caribbean. During his master’s studies in Beijing, he even walked the Great Wall of China. Regardless of how many different places he travelled, his favorite place to go was always Bethel, North Carolina. No matter how far away he went, he would always cherish the moments spent in his mother’s kitchen with his family. Dexter’s memory will be cherished by his loving wife, Kristal Randolph; his sons, Brandon Kent Randolph and Cpl Garrett Mitchell Randolph; his mother, Helen Sneed Randolph; his brothers, Mitchell Randolph, Antonio Randolph(Regina), Willie Kent Randolph; he will also be fondly remembered by his mother-in-law, Nancy Kensler; sister-in-law, Deana Kensler; a host of aunts, uncles, nieces, nephews, cousins and friends.

Dexter Levon Randolph was born on October 1, 1962, to the late Willie G. Randolph and Helen Sneed Randolph. On February 26, 2021, he passed away in the care of Vidant Medical Center in Greenville, North Carolina. Dexter graduated from North... View Obituary & Service Information

The family of Mr. Dexter Randolph created this Life Tributes page to make it easy to share your memories.

Send flowers to the Randolph family.