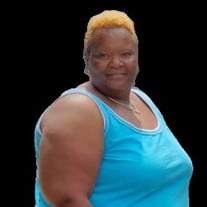 “To everything there is a season, and a time to every purpose under the heaven”. Ecclesiastes 3:1 A Time To Be Born Dee was born on Saturday, August 23, 1975 at 1:19 pm at Beaufort County Hospital. She was surrounded by her ma, grandma Frankie and “Uncle Terry”. It was supposedly the “hottest” day of the year. A Time To Die Dee transitioned peacefully surrounded by “Uncle Terry”, Deidre and Carta to her eternal resting place on Sunday, March 22, 2020 at 4:57pm. A Time To Plant Dee graduated from Washington High School in 1993 and moved to Monroe, NC with her parents. There she learned “the strong work ethic”- working for her own money. She moved back home and attended Beaufort Community College to obtain her Certified Nursing Degree. Dee had comforting hands and a soothing personality that helped her to serve patients throughout Eastern North Carolina. Her jobs as a Nursing Assistant were very fulfilling and rewarding. She had dreams of going back to school to acquire a RN degree. She served at skilled nursing facilities, home health agencies and recently served at Palliative Care/Hospice agency. A TIME TO BUILD UP Dee was christened and later baptized at St. John Church of Christ, Disciples of Christ under Reverend David Wallace. She was passionate about her relationship with the Lord. Dee even tried her hand at singing-she sang with the Gospel Choir of St. John. Later, her dream of a Children’s Ministry came to fruition at St. John under the leadership of Elder Russell Wilkins. She served faithfully until health issues became more prevalent in her life. A TIME OF LOVE- Even before she was born, Dee was surrounded by family and love. Survivors: Ma and Papa, Dale Sneed (Connell); her beloved daughter, Deidre Monae; her precious grandson, Carta Dycir; her sister, Secola Seigh (Cory); her brother, Connell G Sneed II; Uncles, Glenwood Peele (Neicey),Terry Peele, Tony Peele (Patricia); aunt, Elizabeth Moore (General); a plethora of cousins, friends, and coworkers. Thanks be to God!

&#8220;To everything there is a season, and a time to every purpose under the heaven&#8221;. Ecclesiastes 3:1 A Time To Be Born Dee was born on Saturday,... View Obituary & Service Information

The family of Ms. Devedia Peele created this Life Tributes page to make it easy to share your memories.

“To everything there is a season, and a time to every purpose...

Send flowers to the Peele family.