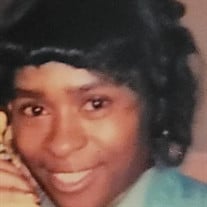 To his Thessalonian friends Paul wrote, “I would not have you to be ignorant, brethren, concerning them which are asleep, that ye sorrow not, even as others which have no hope. For if we believe that Jesus died and rose again, even so them also which sleep in Jesus will God bring with Him.” I Thessalonians 4:13-14 Deloris Jean Brown Hudgins was born April 8, 1949 to the late Randolph and Blanche Mae Brown. She was reared in a home with strong Christian values and at an early age she became a member of Cedar Hill Missionary Baptist Church. Lois, as she was affectionately called, attended Martin County schools and graduated from E. J. Hayes High School in 1968 and also married Dallas Hudgins in 1968. As she persevered through life, she gave her total devotion to her children and grandchildren. Lois had a “humble” and unwavering spirit and personality. She was also a very loving, quiet, and caring person. Her love for her children, grandchildren, great grandchild, and family was immeasurable. Because of her commitment to her children, she sacrificed to assure they had all of their needs and more. They were always her priority. In her spare time, Lois enjoyed listening to old school music, doing crossword puzzles, and watching Family Feud. She would always say Steve Harvey was her man. She had a sweet tooth and ate sweets at every opportunity and would remind Dwayne to make those sweet potato pies for the holidays and then she would try to eat a whole pie by herself. The best description for Lois was Super Mom, and she will be dearly missed by all who knew her and loved her. Deloris Jean Brown Hudgins transitioned from this earthly home to her new home March 22, 2022. In addition to her parents, two nephews, Corbett Rasza Brown and Frederick McKinley Brown preceded her in death. To honor her memory she leaves her son, Timothy Earl Hudgins (Dionne) of Baltimore, MD: her daughter, Tina Spencer (Dwayne) of Baltimore, MD; two grandsons, Timothy Hudgins, Jr. (Brittany) and Taiwan Hudgins; two granddaughters, Alexis Hudgins and Amore Spencer; one great grandson, Remy Hudgins; a special friend, George Flood of Baltimore, MD; three brothers, Ralph Brown (Linda), Randolph Brown, and Clinton Brown of Williamston, NC; three sisters, Brenda Wilson (Earl) of Windsor, NC, Claranet Duggins (Ricky) of Hamilton, NC, and Shelia Brown of Williamston, NC; three aunts, Dorothy Worsley, Lucille Speller, and Janie Burns; several nieces, nephews, other relatives and friends.

To his Thessalonian friends Paul wrote, &#8220;I would not have you to be ignorant, brethren, concerning them which are asleep, that ye sorrow not, even as others which have no hope. For if we believe that Jesus died and rose again, even so... View Obituary & Service Information

To his Thessalonian friends Paul wrote, “I would not have you...

Send flowers to the Hudgins family.